That Was The Week That Was...

Not a lot of movement this week after all.

Family factors (from the Covid in sister's household to Aged Ps' medical issues) and putting together a Blog for the Reenactment Group (link).

Which, of course, meant looking up pics and links to what we've been up to in precious years etc. etc...

Also, sword and bill practice both weekends. HOT... But we had a visit from our local police, first weekend, to see what we were up to; which was fun. Great couple of guys; a chat, a photo-op for them holding the weapons - and a possible recruit.

Meanwhile, instead of the next game being finished, painting (of course) took over as semi-finished bods fished out the box demanded attention (below) and I repaired my home-made costrel (in theory we have a medieval event in a week or two. Apparently with me in charge of our lot. Oh, dear...) 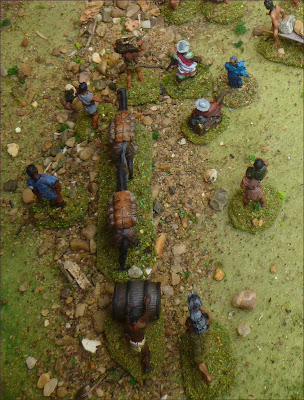 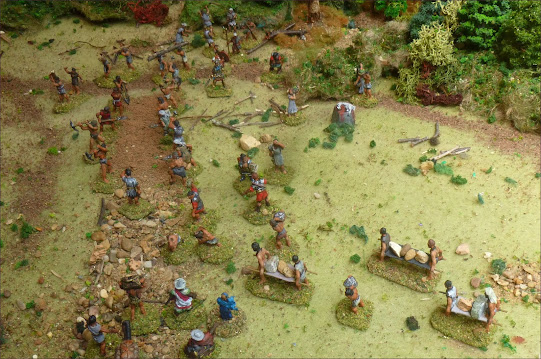 However, I got the basics for the next game drawn up...

Centurion Marcus Niger's maniple has been on a two day Escort Duty in the Bush; cushy work, but somewhat "roughing it" (no home comforts, no fun away from The Depot).

After a nights rest in (relative) "civilisation" near the Road Station and settlement of Regulus's Ford (at least there was a pub and a snack bar) they were preparing for an easy day's march home along a proper road.

However, as they mustered themselves at first light, frightened travellers started dribbling in on the road from north and south, with talk of war parties of revolting Briganti, close to a thousand strong, in both directions. The locals would appear to have risen. Marcus has several choices;

To stay put, with the possibility of having to defend the station and settlement of Regulus's Ford while heavily outnumbered.

To head south (to "Nowheresville") or north (towards The Depot) along the high road; with the risk of being met en route road by a superior force of rebels.

To head east, through the woods with a local guide, and so by northward wending local tracks to home.

Marcus chooses option three ( Because I've already got the woods set up....? I may fight the other options later...)

He has his maniple, each of which has a full Command team (I will be scaling this exercise as 1:1  - because I want to play with Command & Control again).

However, as with just about every Roman unit for which we have contemporary records Marcus's command is likely to be under-strength; possibly considerably.

[To find out how bad the situation is I'll throw an average dice for each century. A result of 2 = 20% understrength, 3 = 30%, 4 = 40% and 5 = 50% (too many guys on secondment or detached duty, sick, on leave, have managed to wangle something with their Optio to avoid the route march, left at Regulus's Ford due to blisters and sprained ankles etc. etc.).]

Marcus decides his lads' hands need to be unencumbered on their adventure, so commandeers mules and a small wagon to carry some of the guys' kit. The rest is left at the Road Station.

He has one local guide... He has never met the guy before, though the chap is vouched for by the staff at Regulus's Ford. All well and good...

Unfortunately a rag, tag and bobtail of civilians at Regulus's Ford want to come with......

This COULD be a simple progress through the countryside for Marcus and his boys. However, there is a chance of Chance Events as per the draft table below (right click and open new tab to see larger). 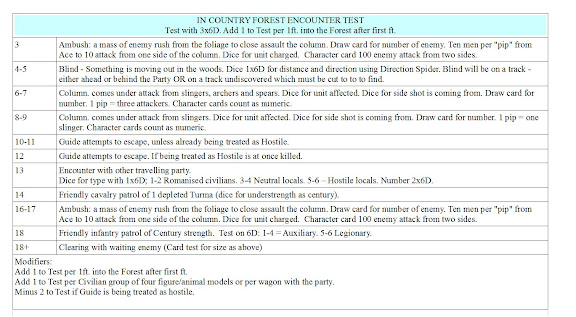 Unit activation (such as in SP) won't come into play until/unless:

a) I split my force. In which case my normal C&C/Activation/Subordinate decision processes will come into play. As well as making its own decisions and progress each independent force must check of Events separately.

b) Actual hostile units arrive in LOS. Once (if) this occurs then my normal fighting rules will come into play.

[Note: enemy units which move out of LoS will split into 3 Blinds, one of which will be "real" (i.e. the hostile unit) two "dummies". HOWEVER, there will still be a risk of Events occurring.]

So there we are; the basics for the game prepared. Next Post will be the Action Report.

New purchases for reading & playing/idea-poaching (below). 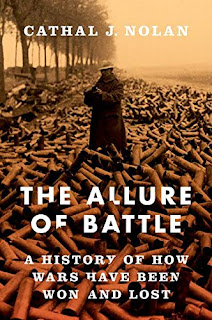 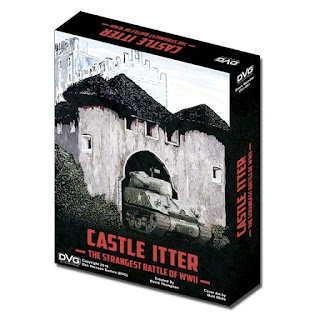 Did polystyrene cement ALWAYS melt the plastic like that? I can't remember. Or maybe it's just that my fingers were nimbler... 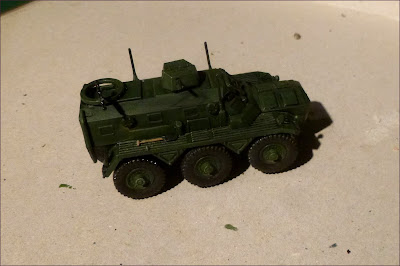 I need to print out some unit markings for it (special project: watch this space), but it'll do.... 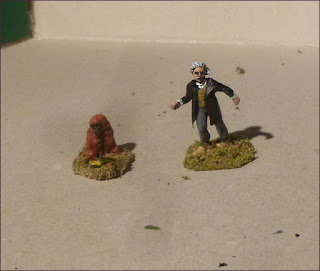 I'm not 100% sure who the chap in the frock coat will be, as he didn't turn out quite as I intended... Bit tall for Einstein..? Mark Twain should be in white, I feel. She Who Must Be Obeyed said it looked like me. Bloody cheek...

Mind you, I do have a frock coat. And a waistcoat that colour. And I haven't been near a hairdresser since last year's Spring, so maybe.....

Also, some research on Romans, and reading others' research on Mortimer's Cross - which produced this unusual image.... 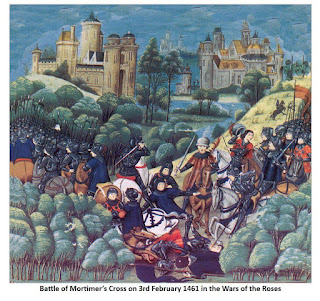 Re. the Blog itself: I have now made some "Labels" re. subject matter, so as to make searching easier.

Also, I note, re. "hits" on the Blog, that this week there has been a sudden (suspicious) flurry of some several hundred from Sweden; which is not normally part of my "constituency". Very odd..... Hmmm...... 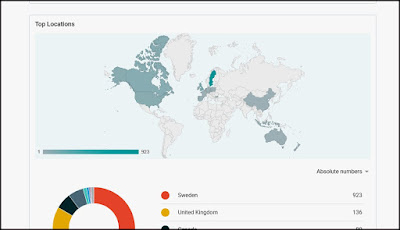 Anyway, I have promised myself another woodland game this week (not tomorrow; tomorrow we have sword and bill practice), so expect more shortly.
at July 10, 2021 No comments:

Too much messing about with Green Stuff than is probably good for me, plus family and social stuff have stopped me playing with anything the last week/ten days. Also, wrangling my first bad E-Bay experience, with an OOP board game seller, has been occupying time.....

Meanwhile, ideas keep coming for more Forest-related fun (Medieval and Roman) while the woods are still on the table, plus more "Hunt/Investigation ideas to use with the results of recent conversion madness (pics below..)... 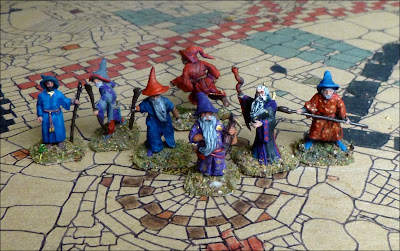 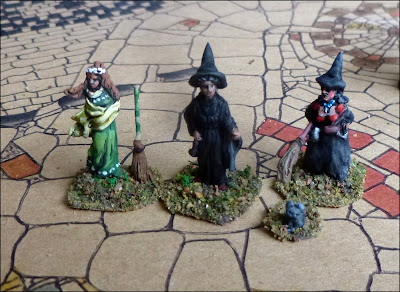 A mixed bag that I HOPE doesn't grow.... 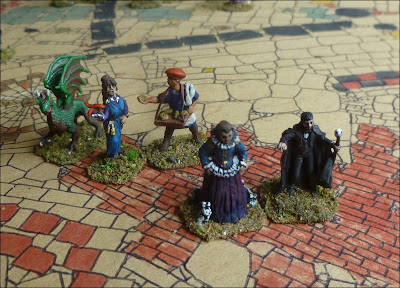 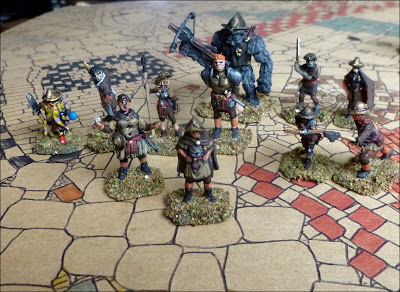 Luckily I've moved on from Pratchett to some historical novels reading-wise the last day or two, so maybe that's enough Discworld things for now... ☺ 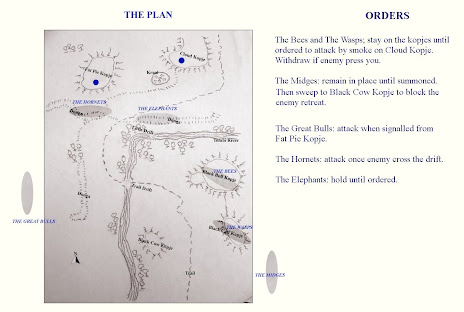