Some new arrivals (below) await painting, as do some AWI and "Year of the French" 6mm bods. 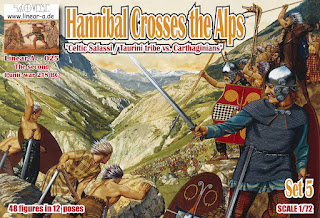 Some comments on Bennos' Forum re the last post (the Romans in the woods) have got me thinking about expanding on a long- forgotten project (pic below..). Hmmm.....

Meanwhile, I was pipped at the post re. some painted E-Bay 1/72s for Napoleonic skirmishes, so more painting to be done there.

I want to get some experiments with sci-fi and Pratchett stuff underway too...

Never enough time.. PLUS some reenactment events have started up this month - so time "lost" from gaming to sewing, repairing and polishing my armour.

In Country With The IttiBritti

And so we begin. 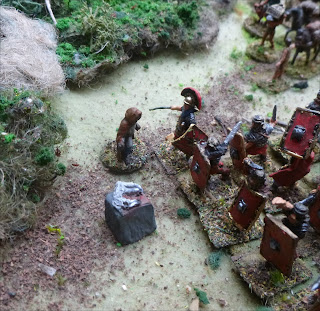 Only a scatter of civilians have joined the party (thank goodness) but the maniple has its compliment of servants, mule etc. (Remember those... 80 soldiers in a century.. And the OTHER 20...) in tow. So enough are enough.. 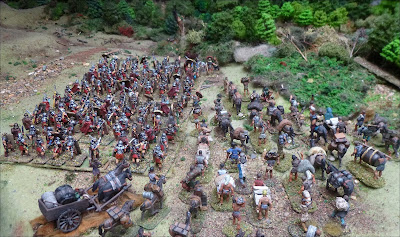 Things start off reasonably: there is a clearing, six persons wide to start with, then a narrow stretch, then things open out. But by move four the column is getting strung out.
[I dice (1x6D) for each 300mm on the table for width of the track taken. That width will be "one person wide for a throw of 1" etc.] 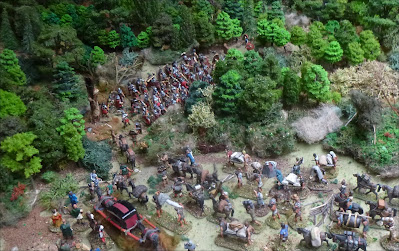 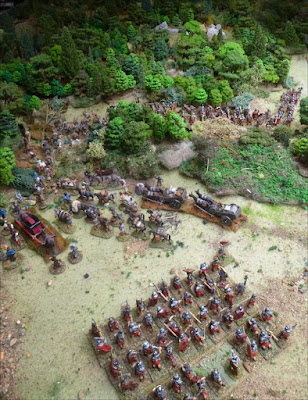 Then - an Event. The Guide tries to escape !! This is NOT a good start.
A quick bit of RPG style testing; although the guide has a head start Marcus is too quick, grabbing him and getting ahead of him. The guide doesn't have the bottle for a fight, and gives up. They now have a Hostile Guide... Great. 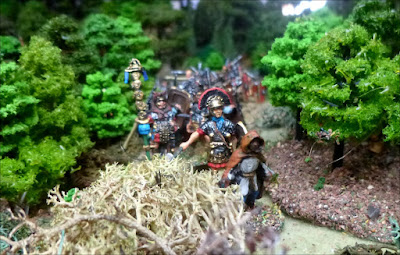 With a gladius at his neck Mungo takes them further into the wood.  The second century, under Junior Centurion Quintus, hasn't even moved yet because traffic is backed up all the way to the entrance to the wood. 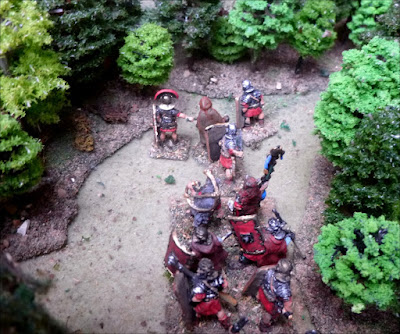 I KNEW moving a column through the trees would be difficult, but this is ridiculous. 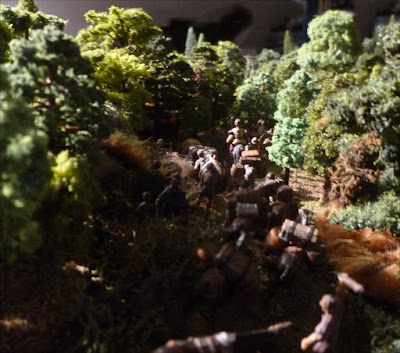 Splitting my force into penny packets to escort stretches of the column - which I'm tempted to do - would mean making us more vulnerable to a mass attack AND restricts the amount of baggage that can actually pass a given point at any one time, thus making the column longer and thus even more vulnerable... 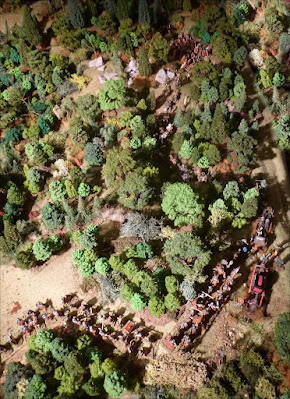 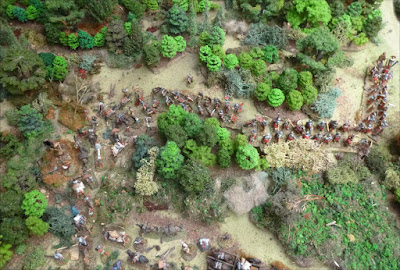 We plod on. By move six the whole party is now in the woodland. Suddenly (an Event Test) Quintus's maniple is hit with slingshot. Only four bullets incoming from persons unseen, but two men are killed. 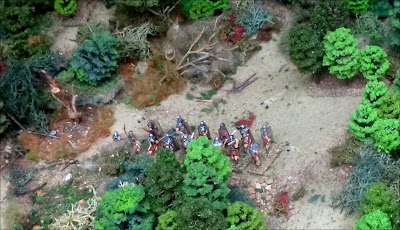 I have no control over Quintus's maniple (I am too far away - I don't even "know" this has happened). Trouble is, neither does Quintus (his guys are too strung out). Local control falls to his Optio: who stops his guys from loosing and losing pilae in the woods, but hunkers them down in case of more shooting. Meanwhile: the column moves on. 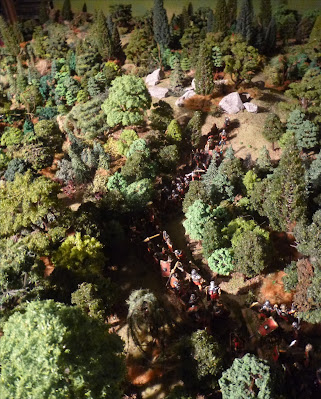 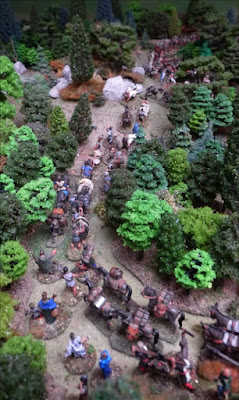 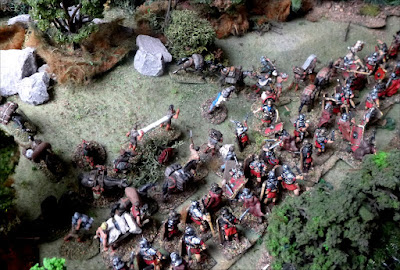 There is a vicious tussle; with Roman and Celt going down in numbers. Quintus takes two minor wounds but his command holds the first assault and neither side gains an advantage. There is a second, inconclusive round of combat - and the Celts step back; snarling. 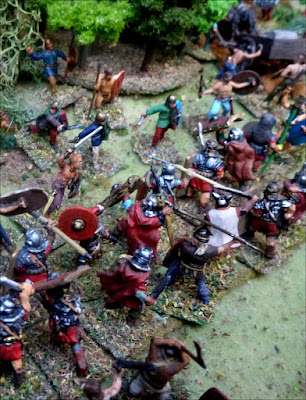 Meanwhile, uncommitted elements of the Celts hack into the civilian train. 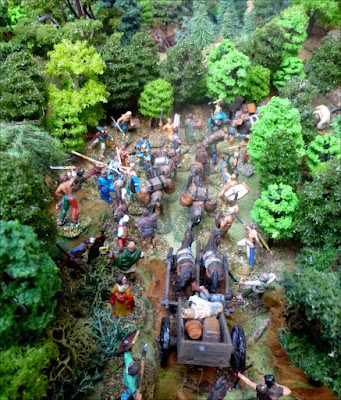 Next move the head of column had stayed still. But then moves off. Nobody has thought to tell Marcus what is going on at the back.
Quintus makes a decision: the wrong one in my book. He clusters his men around him in a defensive mode. There is more snarling match between his guys and the Celts, but nothing else that move..
Meanwhile, at the rear of the column, Quintus's Optio pulls his men into a defensive cluster as, once again, they are peppered by hidden slingers. Two men are wounded, one killed - and the Optio is also hit and injured. He tests, and has had enough.

His men have been shot at twice without even seeing the enemy. He has dead. He has wounded. He is separated from the rest of the command. Elsewhere in the forest he can hear the triumphant yells of wild Celts and no other Romans can be seen. 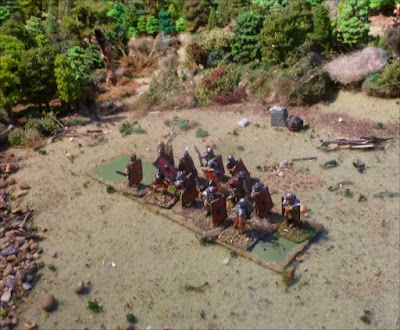 He leads his remaining twelve men out of the woods without incident and halts. He can hold here. of reform and go back into the woods. Neither are ideal. His only other option is to head back towards Regulus's Ford.
Marcus pushes on, but at end move he is told of the attack on the second maniple. He has almost reached the other side of the wood. He has choices:

Simply push on, and reassess on the other side or halt his troops where they are, and allow the civilian and servant traffic through.

Send part - or all - of his century back to see what's occurring at the back.
He decides to halt and allow the servants, civilians and baggage to pass, send his Option with a third of the century with them, and take the rest of his command back to see what has happened to Quintus. That's the plan... But..... 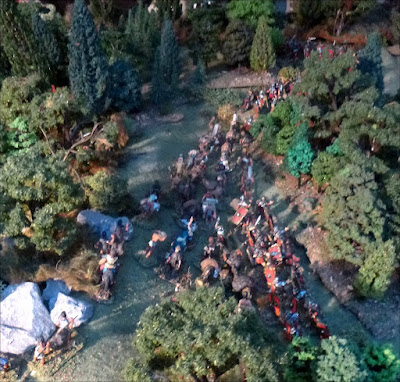 ....there is a Event... Marcus is told that outside the woods an enemy force is waiting for them. About sixty of the blighters...
Meanwhile, Quintus's band is attacked by the hovering Celts. But his men hold - then actually push back their assailants, allowing the legionaries to push along the track.  The Celts are still up for fighting, but have had their enthusiasm blunted. 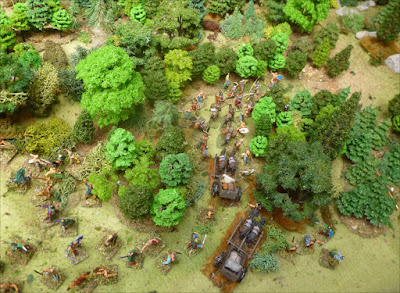 The next two moves are Event-less. the Celts in the wood don't regain their bottle, and Quintus, along with eleven of his men, manages to catch up with the main column.
I spend two moves organising my lads. The Celts in the forest seem happy with their loot (all the wagons, the armour and weapons of my fallen guys, five mules and and whatever was on the slaughtered civilians). This only leaves the "welcoming committee"  beyond the forest edge. We will have to drive these off before the game can end.
A quick rearrangement of the table, and.......

Marcus's century double-time out of the woods and forms up. In front of them are about sixty Celts. There is no indication of pursuit from the guys in the wood, but (callously perhaps) Marcus leaves the servants and remaining civilians as a "buffer"  on the trackway behind his fighting force. If the enemy in the woods do press on they will hit the civilians first.  The remains of Quintus's century forms to Marcus's right. 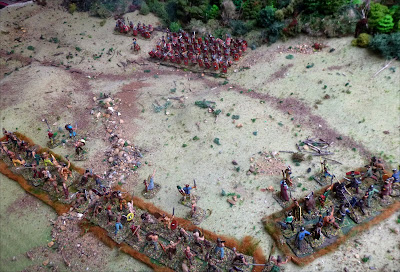 Numbers are currently about even outside the wood. Acting aggressively would seem the best option: Marcus decides to charge the enemy and quickly break them in a Flying Wedge with the first four ranks. The last two ranks, under the Optio. Will advance, to support if necessary.  Quintus will hold where he is. It takes a full move to arrange the formation and another to pass the orders but to be frank we are not worried. THIS is our kind of fight.

However, once the Romans are formed the main body of the enemy rushes forwards - so much for plans. Marcus just has time to order eight men of the rear four files to move to face the flanking enemy force (who seem to be the higher status guys), then order a volley of pilae from his first two ranks. 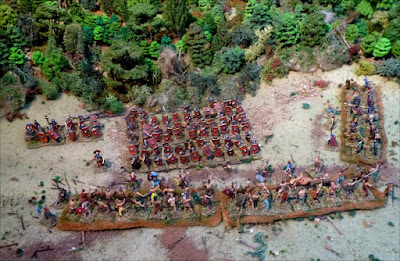 The missiles slice into the Celts, bringing down three of their command figures and a whole slew of warriors. So far so brilliant...
Quintus's men chuck their last pilae too.

Marcus's Optio is activated, stiffening the flank guard.
Next move the optio activates first. His flankers throw their pilae - and two more command figures and several warriors fall. Quintus is activated, but has no orders to charge, and no more pilae, so holds.

The Celts slam home onto Marcus's century. There is a brief melee to the century's front - then the Celts there scatter. Almost all the Celtic command figures are down and over half the force are casualties. 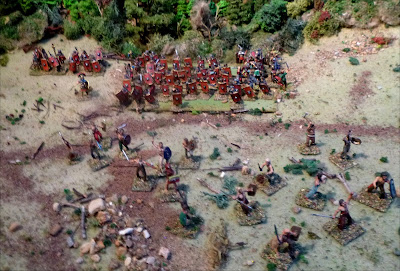 The better armed warriors who attacked the flank carry on fighting into the next move, but recoil, holding their line as they withdraw. Quintus sweeps round the enemy left flank, picking off a few stragglers. Job done. 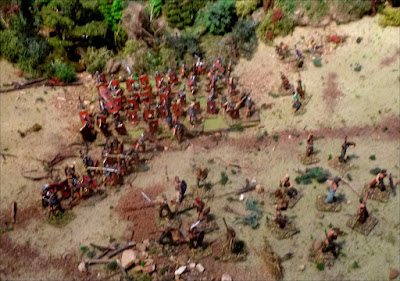 Despite a couple of scares the Celts in the wood don't make an appearance.
Marcus gathers his guys together, checks his wounded (5 serious wounds, four light), quickly buries his three dead and sweeps the field to kill off any enemy fallen (while the enemy "elite" dragged their hurt ones with them as they pulled back,the main force of the enemy broke, leaving their wounded, and it was a very short fight with time for only the lightly hurt to hobble away. Over thirty Celt enemy dead all told).
He then summons the baggage, and off they march.

That was an interesting exercise - but really not "enjoyable" from the point of the management aspect; the game was tense and fun, but "Phew". The "sniping" and sallies from the trees were a constant worry - even when they didn't happen.

Loses were bad - a good proportion of the civilian/servant train (maybe a third) lost, Quintus's century reduced considerable and terribly shaken - in all the excitement they left their wounded in the wood when they broke out and Marcus was too busy to ask about them. NOT good....

Once we got into open ground and to "our type of fight" it was a walkover. But will the Celts see it like that...? They lost a lot of guys, but gave us a bloody nose, took a lot of loot and gear - and did whatever they did to our abandoned wounded.... Hmm.... No laurels for this one....

Moral of the story; don't go in the woods. You're sure of a big surprise..... 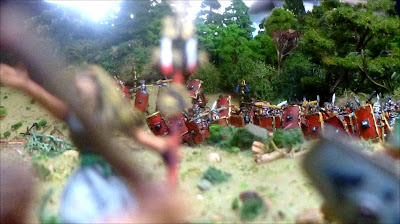