The Great Experiment...
As touched on in the previous post I have decided to go for the "harder option"  in my "This Ain't The Judean Revolt" project....

The board/Revolt Table was printed out for me by the jolly chaps at the print shop and we have begun..... 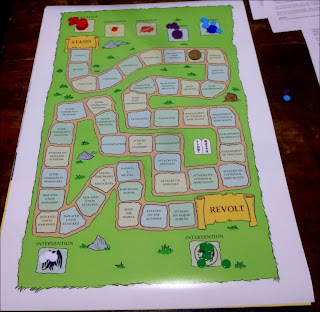 First Moves of the Scenario Generator (me playing as Procurator).

First move the Agitators decide (dice) to go for an Assassination, so we leap to an "Assassination" scenario. This works as follows......

Action One: Throw 1D12 to discover Level of target, then within each group for type of Target. Those marked with * asterisk will have bodyguards. Those marked ** have a 25% chance of having Military Bodyguards. Dice for this.

If the assassination is successful the Type value equals the number of Squares moved towards revolt . Half that number for number of squares back towards Stasis if it fails. Less than 1 = no effect.

12: Senior Roman Official: High-level Administrative or Military Officer **- even the Procurator or Member of his family. These will have significant protection at different levels of access. If outside their official locations/homes they may not only have bodyguards, but also a significant military guard. 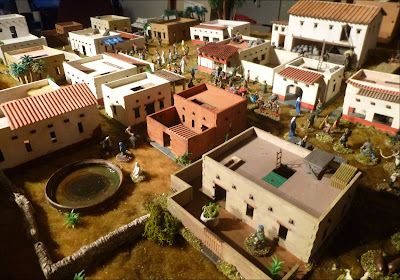 Then dice for the Target Location:

If the result is an Open Road/Countryside or ordinary Street attack then 1x6D throw again to see if this is a Planned or Opportunistic attack. A result of 1-2 means this is a chance encounter. Any result above 2 means a Planned one. All other Target Locations are Planned attacks.

If result is Temple dice again 1x6d. Result 1-5 at entrance/street in vicinity of entrance. Targets attacked outside the Temple MAY flee inside. Assassins individually dice to see if they have the bottle to chase on - 6 on a 6D.

If result is 6 on the location dice the Assassination attempt occurs within the Temple Complex (the public areas only).

The Temple Complex has it's own enforcement teams and is closely monitored by the Auxiliaries of the Antonia. Both parties may intervene but Auxiliaries may NOT go beyond the Balustrade.

If failure occurs within the Temple Complex an additional 6 spaces towards revolt are lost). 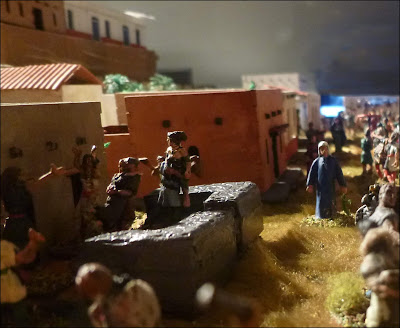 On this occasion dice decide that a Low Level Collaborator, in this case a low-level priest/levite is the target.

The Location throws make it a Planned "Street Attack".

In this case I throw a 1 on the dice, but it is Planned, so I get an assassin and a "spotter".

I next throw to see how aware/informed in advance of their danger the target is. 1-2; is either unaware, overconfident or too unworldly for the threat to register. 3-4 aware - and keeping a sensible eye out, but not enough to take any special precautions. 5 - very aware. Will take all reasonable precautions, including varying routes, never travelling alone. 6 - practically paranoid. Will be constantly watching. If rich enough will have bodyguards. 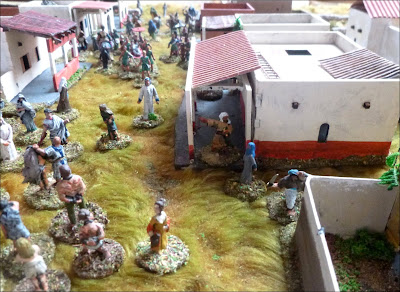 "Picking off the Priest"

The setting is a sleepy, prosperous suburb, just outside the city walls, home to Matthias son of Aaron of Hebron, a minor priest attached to the Temple. His family is not one of the great priestly families but he is well respected locally for his wisdom, public profile and good works. However.....

Lately he has been speaking out against the Freedom Movement in the small private and public gatherings in this cosy little community; arguing that peace, prosperity and the so-called religious "freedoms" granted by the Oppressors are important in themselves, and that provoking the Romans with what he calls "nationalist dreaming" will only bring about a massive retaliation. He EVEN used the term "status quo" !!!! This kind of talk goes down well in this neat little settlement... They need a lesson.....

Judah ben Simeon and Saul of Gadara have been despatched to demonstrate to these comfortable people that their secure little cocoon is an illusion - and that those who are not with are deemed against us..........

My two assassins take post where they can see Matthias's house and wait.

Each move the following happens:

Throw for Matthias. He may leave the house alone or with his wife (throw 1xE6D. 5 or 6 and the missus is coming with him part of the way). Matthias leaves his house on the throw of 6 on a 1x6d, adding 1 to the dice for each move he hasn't emerged. However, if at any time two 1s are thrown in sequence when testing for this it is found he has already left or the assassins have missed him because he is wearing a different outfit from usual. He will be between them and the Cite Gates. The assassins must check each man in a keffiyeh between them and the gate. To so so they must get within 3cm of the suspect, then throw 6d. A "6" and it is Matthias. 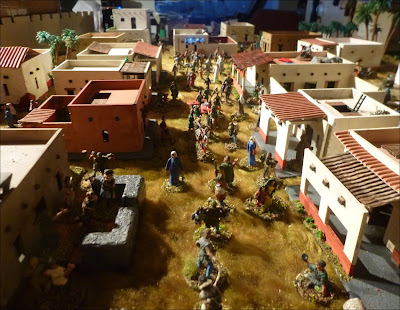 Local traffic will move randomly (1x6D each move, testing at each junction for direction to take).
If in a traffic jam all movement is at half speed. Confrontation between large bodies/wagons etc . will be decided by dice throw, adding two to the largest/highest status group. The other must try to back up.

As the assassins wait and watch at the corner of the town square they see Matthias emerging from his house. Dammit - his wife is with him. A complication, but he is coming up the alleyway leading to where our lads are waiting, so that's good.. 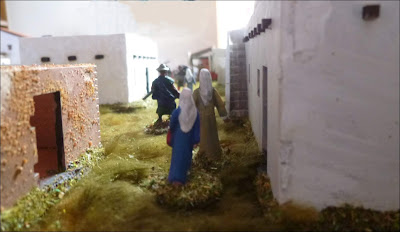 Local traffic moves - two slave drivers with their charges and several pedestrians decide to go down the alleyway leading to Matthias's house. My lads wait....

The next move there is obviously a jam in the alleyway. Matthias must avoid pollution from rubbing shoulders with the slaves, so he checks (dice) and retraces his step to approach the square by the other street. My lads have lost sight of him...!!! Not good.... They have a choice -run, and draw attention to themselves, or walk. They walk... 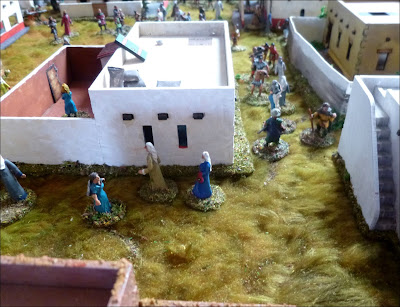 Bad news... Their casual ambling means that they run into traffic- a litter bearing a wealthy merchant, his bearers, staff and bodyguard. In going round him they get separated by a casual pedestrian. They lose two moves due to bad dice and the traffic- then another as the litter bearers come face to face with a hand cart... The cart backs up - but the litter needs to go in THAT direction (all diced for).. Another move of disastrous dice for the assassins - they are stuck in the crowd.. 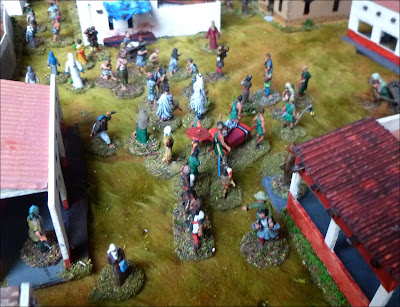 Luckily - out of sight to them - Matthias has been accosted by local worthy Lukas (there is a chance of this every time Matthias meets a person of higher status) and they stand chatting for several moves.. 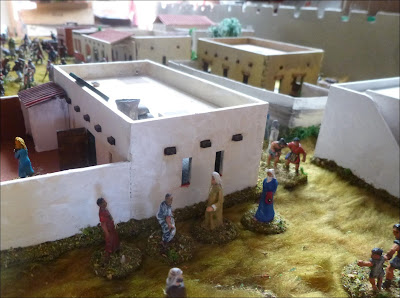 My lads are getting frustrated then - oh, oh...... The Enforcement Check goes against us; a pair of vigiles round the corner leading from the palm grove... That's ALL we need...... 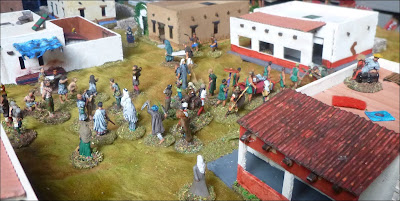 More delays,  but once the traffic chaos is sorted my lads finally get though the crowd, slipping past the vigiles unnoticed....
Matthias hoves into view - but the vigiles are still in the square checking up on the slave dealer's licence... It's a tough call. Do we try to take the target now, or wait, and possibly run into more traffic...?

We decide to lurk and wait. 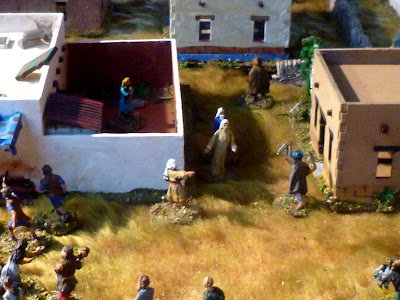 As Matthias enters the square the guys move in, but he sees them out of the corner of his eye and turns... In the scuffle Judah and Saul both wound him - but nothing fatal... 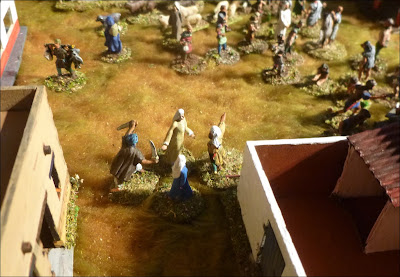 And oh dear... An enforcement throw... What are the odds.... Two tents loads of legionaries arrive at the edge of town. But they're just passing through.... 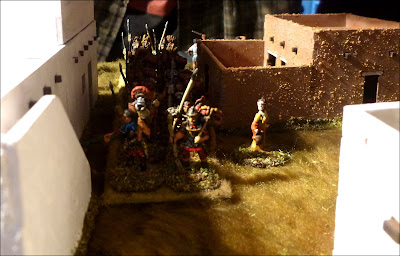 One of the vigiles turns at the noise, tests for courage and charges in with his baton - clouting Judah... His mate follows.... 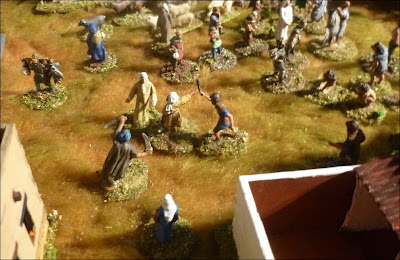 Saul gets in a killer stroke on Matthias, then briefly has a go at the one of the vigiles. Now Matthias is down both assassins turn make off at speed - job done; and they're not there to fight.... While one Vigile tends to the casualty the other gives chase.... 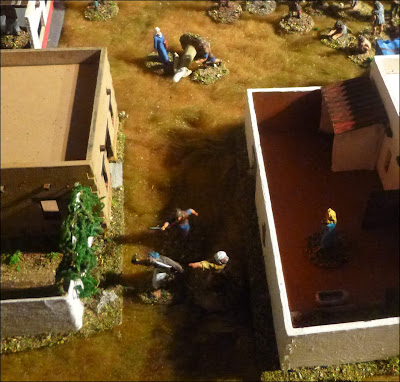 Meanwhile the Legionary unit arrives in the square.... "Looks like some inter-Judean squabbling... What can you expect..? Let the Vigiles sort it out...". 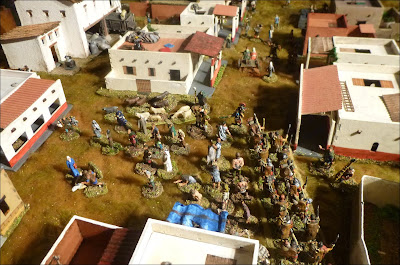 There is a brief chase though the street, but the lone vigile gives up... Seriously; he does NOT get paid for this... 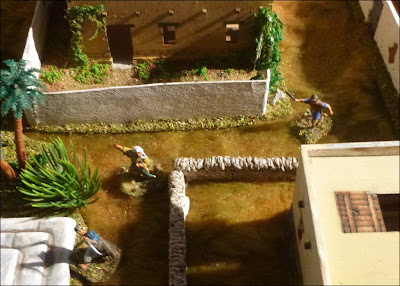 And, scampering off into the palm grove the assassins make off.. A couple of baton bruises, but otherwise unscathed... 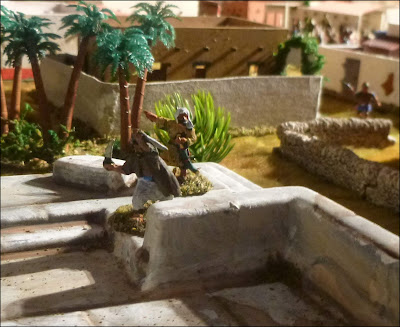 Mission accomplished.. That was great fun..... Lots of tension. The traffic issues and unknowns felt "realistic" and all in all I was happy with the mechanics..

The successful mission will have an effect on the Revolt Table... I wonder what the next scenario will be...?