Basics:
The principles follow those of the WW2 "Crossfire" rule set in that having "The Initiative" allows an Active Player to fire, spot enemy or move units/formations as many times or as far as he desires in a single move, until an attempted action fails or until action is interrupted by successful enemy reaction/action. There are thus, generally, no measured movements.
The "Crossfire" rules are, however, intended for small unit WW2 skirmishes where distances are short and real-life weapon ranges, even when scaled to a ground scale, generally exceed the table dimensions. On large scale battles (e.g. in 6mm) and periods where missile weapons have limited ranges within the scale being used this will not the the case and there will therefore be a need for range distances to be applied to firing (as per the conventions of the rules being used).
In some circumstances measuring movements ("Have they moved into range?") may also need to be occasionally measured.
Certain periods/conflicts, by their general nature (usually dictated by the scale of operations and command and control issues) involve large areas of open land. Given that "Crossfire" is designed for small (company level) scale actions in close-terrain situations we may find that the rule conventions simply do not work well for the actions I have in mind. However, that is, largely, the point of the experiment. 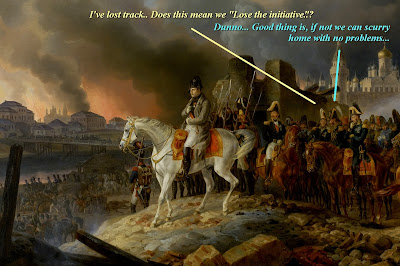 1) Hidden Enemy (moving/spotting):
Clearly, since I will be the "Human Player" I have to make a decision on how the AI will deploy and "act" in advance of playing. I considered using "Blinds" placed on the table, as used in some of my early games and as seen in some videos of certain online games of Crossfire where an attacker is approaching an unknown/unscouted defensive position. While these (a mix of "real" and "fake" Blinds) work perfectly well I have occasionally found them to be an unnecessary (if often visually pleasing) complication in solo games unless the Blinds are themselves called upon to move (i.e. as noisy/careless patrols, search parties,sentries etc.).
I have therefore decided that the standard "Hidden Enemy" conventions used in some of my recent 6mm games will be used initially (being tweaked per game or being Scenario-dependant as usual) i.e. that the Table is "Live" for its entire width and length - as may be its edges (other than, usually, the Friendly Player edge).
Thus as well as the general "End of Move" Enemy Action test (see below) a unit in the open passing in LoS of a terrain item ("Possible Ambush Point" - hereafter "PAP") providing cover for Hostiles within the scaled "shooting distance "set for the scenario must test for any AI action from said cover (See my Pushna Valley and "Ain't Zululand" reports - among others - for examples).
ANY terrain item sufficient to provide cover for an enemy unit is a PAP and will need to be tested for when approached/passed by any Live Player unit moving with Initiative until "cleared" by a friendly unit (i.e. moved through or Scouted/subject to a successful "Spot" check and thus deemed safe). Once "cleared" no spotting or tests will generally be required for the PAP*.
(*Note however that ranges - and hostile equipment - will need to be taken into consideration and that some Scenario Card Draws may allow for "safe & scouted" locations to become hostile  - the pesky enemy can sometimes both creep about and hide).
Like single PAPs, some linear cover features (e.g. stretches, rather than clumps, of woodland, dongas/wadis, river banks, walls, scubby slopes, military crests of ridges/hills etc. etc) may also have to be tested for as PAPS. This will generally need to be done per six to twelve inches of feature length, depending on scale of figures and scenario being used.
The test is made on a 6D. On the throw of a "6" a card must be drawn from the Actions pack and the results applied.
The above seems best suited to replicate the "Crossfire" conventions I have seen being used. 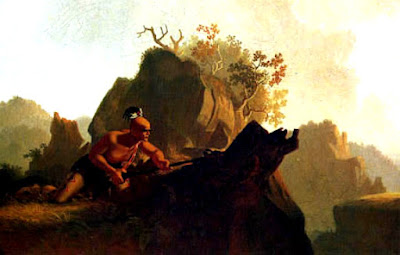 2) Hidden Enemy (end of move):
In addition to tests for terrain items, my standard, End-of-Move, card-based "Hidden Enemy" method will be applied at the end of each Human Player Initiative Phase (even if ended voluntarily).
As with PAPs, above, a D6 dice is thrown. On the throw of a "6" each Friendly Unit/Detachment on the table tests with a further D6 to see if it is the unit affected by the possible enemy action. This dice throw is modified as below:
Units which have carried out an action that Initiative Phase add one to their dice throw (to see if their actions this move have prompted any enemy response).
Units which have taken no action this Initiative Phase have an unmodified test.
Units which have taken no action this Initiative Phase AND are within one foot of the friendly table  edge take one from the test throw.
The unit scoring the highest is the one affected and a card is drawn and placed on the table in accordance with my usual Hidden Enemy distance placement rules and the Card Effects Table applied to see what has occurred.
In the event of a highest scores being a draw ALL the drawing units test ONCE more.
If a further highest score draw occurs ALL high drawing units are affected and a card is drawn for each unit.
The affected units draw a card from the card deck and apply the result immediately.
3) First Move Initiative:
Unless dictated by the scenario whereby the Active Player is the attacker on the first move Initiative is diced for (1x6D), with the winner commencing the action. The following modifiers to the throw are made:
+1 to the throw of the Attacker (if any) according to the scenario/campaign, etc.
+1 to the throw of any force consisting of tribal or irregular forces with an Irregular/Tribal commander.
(Note:I had considered a modifier for "Commander Skill", but, seriously, I think that that to do so is best regarded as having an exaggerated effect UNLESS one is talking about a first-rate battlefield improviser/risk taker of Alexandrian or Napoleonic levels with a team of first-rate subordinates. Maybe more a "Boldness" rather than skill modifier needed..? Hmmmm.....) 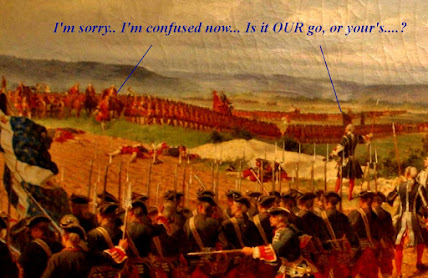 Unit/Formation is Pinned by negative fire results of more than three Pin Points in any one move.
Unit/Formation takes casualties from artillery fire/explosives (inc. IEDs).

General/subordinate commander falls - even if only wounded. Affects all units/formations in LoS.

Failure to physically cross an obstacle.
c) Voluntary Ceding of Initiative:
Either side my cede initiative to the other. However, the AI Player will ONLY cede initiative voluntarily IF the ONLY moves open to the AI involves exposing one of its units to close range fire in the open. 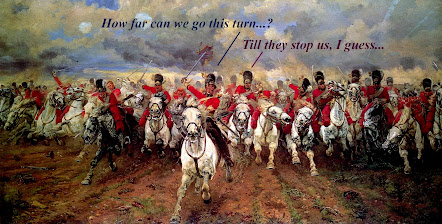 I MAY use my "Changeable Battle Plan" card method (a couple of examples on the Blog here) for AI "grand scale" decisions.
6) AI Tactics:
In general, tactical terms AI priorities will be:
1) For friendly units at immediate risk to seek cover.
2) To attempt to rally any friendly units suffering Shock/Pinning etc.
3) For friendly units to fire at or close assault any hostile unit currently threatening the safety of an AI unit.
4) When the Initiative lies with the AI player and all actions related to the above have been completed successfully at least once, this action MAY be the action undertaken before any further action (Opportunity Test).
Whenever there is the opportunity to complete /achieve a scenario objective or to throw units forward safely so as to by-pass or outflank Human Player units, gain a salient terrain feature or gain other advantage (e.g. close combat a weakened enemy, seize a feature offering LoS to attack Human Player forces) then a, Opportunity Test will be made for each unit with such an opportunity.
If a test throw on a 6D totals 3 or more the testing unit will attempt to carry out that action. Leaders may modify this test throw up or down depending on their quality (Leadership Capability).
If this action is successful then a further such Opportunity Test will be made for every other potentially advantageous AI action.
IF the AI fails ALL tests, yet still holds the initiative, one last such test for appropriate units to use an opportunity is made. If the AI player fails this last test then Initiative passes to the Human Player. 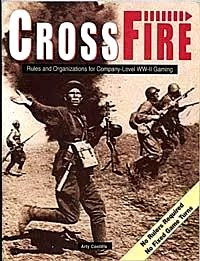 OK, I've set myself a target; time to play. It has struck me that the last "This Ain't Zululand" games would perhaps have proved faster to play using the above conventions. On the other hand I may find that my existing systems work just as well without the "Crossfire" principles. I'm not sure how more "formalised" battles (say, Ancient, Medieval or 18thC.) will work with the "Crossfire" principles. Only experimenting will decide. Watch this space...
at December 18, 2022