After the action at Jackson's Farm we move to the last map move in the 1776 Saratoga Scenario - and the randomised leader activation makes things tricky for me...

Grey assaults Philadelphia, which falls. This alone probably loses me the scenario - but Washington, up in the hills, simply just doesn't have the manpower to contest things, so there's nothing I can do.

In the north Burgoyne splits his troops at Albany; leaving a garrison there and himself heading up towards Ticonderoga (hoping to thwart Lafayette's move along the St. Lawrence? Who knows..?).

Despite the "friction" encountered at Jackson's Farm Clinton (unluckily for me, dice-activated before Gates on the map) has swept up the Mohawk Valley in pursuit of Gates. I decide to break down the move down with simple dice tests (with a penalty for Clinton) to see how far Gates gets before being caught up.

Luckily Gates makes it past Fort Stanwix before the British get near. This is key. As Clinton approaches Stanwix he then has a choice - attack the fort, and risk losing contact with Gates, or pressing on. He elects to attack the fort and takes it in two assaults.

With the fall of Stanwix the British have now definitely won the scenario.

Lafayette is too slow making his way up the St. Lawrence to take Montreal or Quebec.

Washington, in the hills north of Reading, is impotent, due to lack of men.

Stark could have run minor interference in New England, but hasn't enough men to make a difference or to force a battle and is being pressed by Howe and another detached force. He withdraws into the White Mountains.

At move end, while the Americans hold one of their objectives - Ft. Oswego - the British have taken Ticonderoga, Albany, West Point, Ft. Stanwix and Philadelphia, so have piled up the Victory Points.

On the other hand, looking beyond the scenario, the Continental forces have avoided costly losses, so still have two viable armies in the field. Personally I think THIS should count in the VP tally, but I don't make the rules. Were this part of a longer campaign this successful avoidance of destruction would be counted a good thing....

However, HAD there been a further move or two Lafayette could have pressed further into Canada, but he would likely have had to face Burgoyne and the Canadian garrison troops (now released from their static role by his incursion). A defeat here for either side could have been disastrous.

Up by Lake Ontario Gates could possibly have been forced to battle by the combined forces of Brandt & Clinton. Or he might have slipped away (again) and headed south to join Washington - or even (more unlikely) north to follow Lafayette. Who knows..? 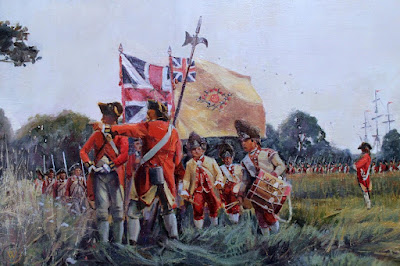 Looking at how the game panned out The (dice-controlled) British were FAR more active than historically.

The march on Philadelphia was perhaps predictable, as was Burgoyne's progress towards Albany. Howe' unexpected move into New England stopped Stark being a nuisance, but it was Clinton's march on West Point then, critically, on to Albany that was the clincher.

Had Clinton not pushed beyond West Point - and had instead sat there, or, say, had reinforced Howe' push into New England, or even pulled back to New York -  Gates, when facing Burgoyne's (rash?) attack at Albany, would not have been worrying about the threat to his rear, and thus would have had the aggressive and capable Arnold, plus his regiments, at his side in the redoubts above the town. Had Arnold been there, to perhaps blunt Fraser's flanking move, the Battle at Albany COULD have been a Saratoga.... 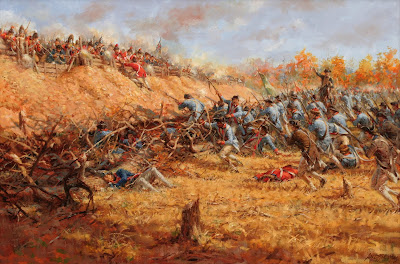 THAT was fun.... 1776 was already one of my favourite board games, is always repays replaying, and has proved to be perfect as a "scenario generator". Had I wanted to I could have fought a number of fort assaults and a city assault, as well as the two field battles. The great thing with tying a battle into a campaign being that by there was a reason for each fight AND a clear intention/objective on the part of the combatants. Using a board game makes campaign "creation" far, far less work..

I will note down down the forces Gates/Clinton/Brandt & Warner would have had next move at Ft. Oswego, and also the respective forces available to Lafayette and Burgoyne in Canada - thus giving me two ready-made battles to fight out later, should I so wish.

That was a try-out WELL worth repeating.

As always, I welcome any queries or feedback. Next, a different write-up of a different battle I fought the other week, working with the "Pony Wars" rule set. Watch this space.