From the last post we scouted the Turkish Watering Station. Now we raid it. 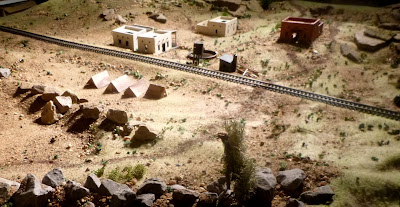 Simple rules and the usual chance of Events.

We have gathered a bunch of guys. Now we approach the target, again just before dawn. We know there are tents there, and possibly patrols. However, our failure to recce the whole area means there is a big "unknown" at the area between the buildings.

In theory, I have a big bunch of guys at my disposal. I make my plans. However, when my guys arrive what actually arrives is going to be randomised (basic dice throws)....

My troops are made up of foot and two bodies of horse. The foot are to sneak to the rocky ridge overlooking the tents between the ridge and the railway.

Once in position they are to await the arrival of the two wings of horse. When these arrive the foot are to shoot into the tents, then rush them.

The two bodies of horse are to flank the buildings from both sides, and dismount, shooting to deal with any visible opposition or pinning anyone in the buildings.

The foot are then to rush the outbuildings.

All swings into action. BUT.... Hardly any men have turned up... Far fewer Bods to attack with than I thought I'd have. But too late now. The hounds have been unleashed.  The infantry are few and far between, the horse equally so.. The perils of relying on irregulars...

The foot reach their position without incident and the horse swing onto the table. 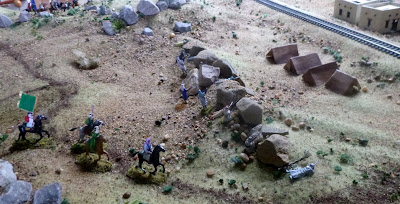 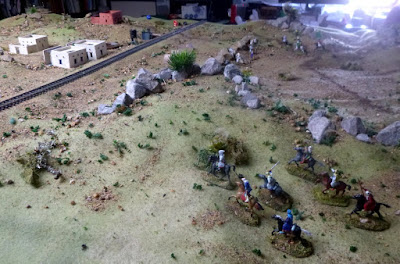 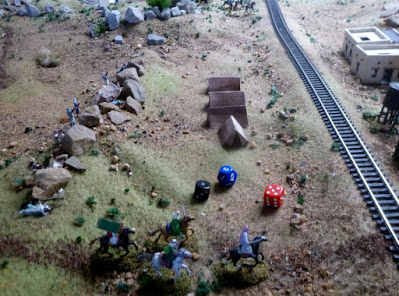 As the two wings of horse approach the railway lines we do some rapid testing - are they heard by the guys in the tents..

We also test for sentries (and their alertness).

It turns out that there are two sentries atop one of the hills above the buildings facing my left hand group of horse, and another is seen on the roof of one of the buildings by my right hand lads. 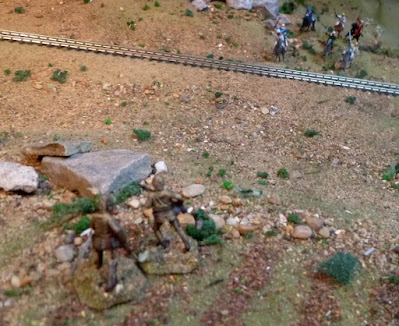 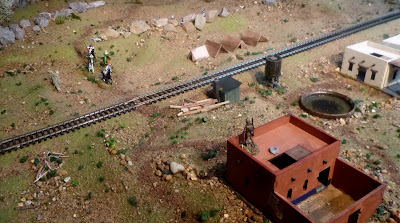 There is an exchange of fire between my moving right hand group of horse and the sentry on the roof. We are lucky - he falls; but the gunfire will awake the camp. There is nothing for it but to go for it.

Meanwhile, the sentries on the hill are rushed by my left hand horse. The Turks shoot, but hit nobody. They are cut down. 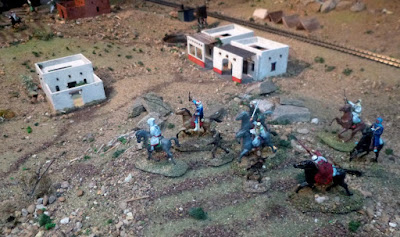 While all this is going on, at the sound of the shots my men afoot fire at the tents. IF there is anyone home some of them are being hit... 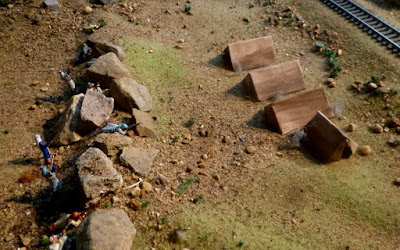 Good news: the horse can now see that there are no additional tents between the buildings. 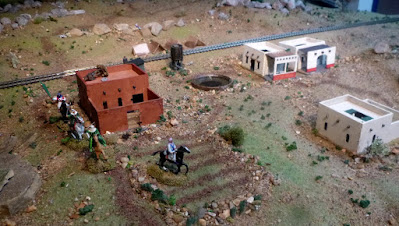 Bad news: the tents produce a swarm of enemy, and then more Turks emerge from the buildings (buildings and reactions tested for). 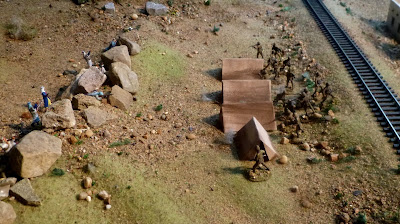 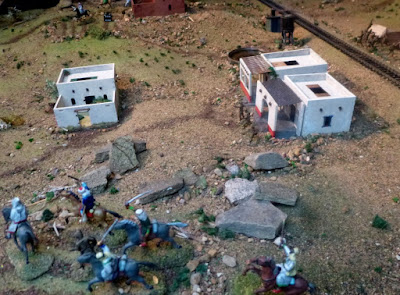 On both sides of the buildings my horsemen dismount, grab their rifles and take cover; shooting into the emerging defenders. Firefights all round; but the Turks are getting the worst of it. Several Turks fall, both at the buildings and by the tents. 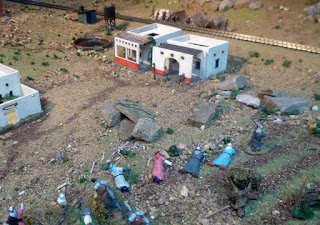 A further stroke of luck; rushing from one of the buildings the enemy officer is struck and falls, mortally wounded. The Turks by the tents take casualties and - already shaken by the rude awakening, panic; making a bolt across the tracks to join their mates. 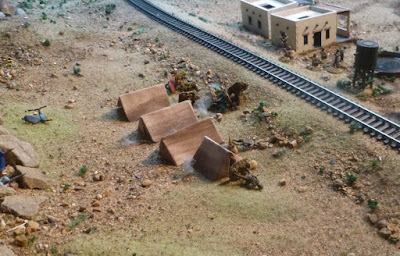 My foot rush the tents and "deal with" the wounded Turks while the rest of the enemy garrison hole up in the buildings. 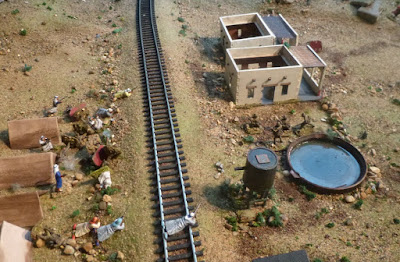 With all the Turks now in the two buildings by the tracks there is a shootout - the longer it takes the more risk there is of an "Event", but I feel confident.. 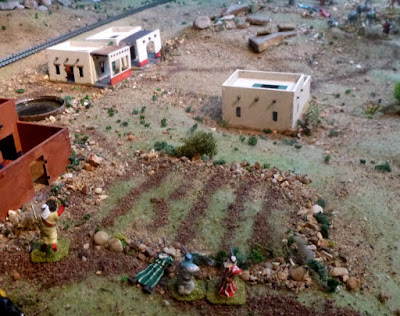 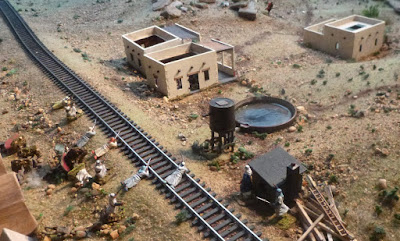 But I am lucky. With only two of the buildings having produced enemy (this was randomised) and the guys in the tents having takes serious casualties we have more effectives than the Turks.

The fire of my guys rifles slowly whittles away enemy until only the seriously wounded are left alive. My chaps rush the area; and all is done... 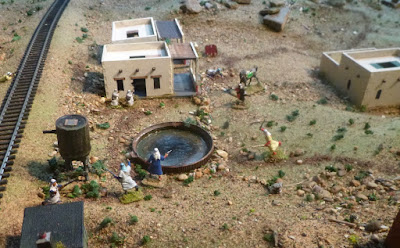 While the charges are brought across and set to destroy the water tower, and the buildings set afire, a solitary Turk turns up at the edge of the table, strolling along the railway line; presumably some sentry - but at the sight of my guys he makes off. 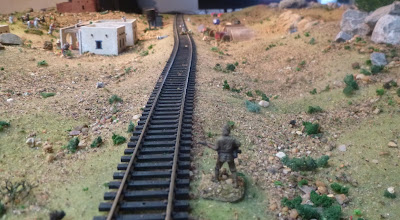 We gather ourselves together and pull out...There are no further incidents; job done - and we withdraw with no further loss...

Again, a simple but tense little operation; the decisions (dice controlled) of my "independent" bodies of men were sound. We were VERY lucky with Events (compared with last time - the luck of the draw) and the dice; but things could very easily gone very wrong had there been more tents at scene or more Turks in the buildings....

A fast moving - and very short - exercise. Simple to set up and do but great fun.... 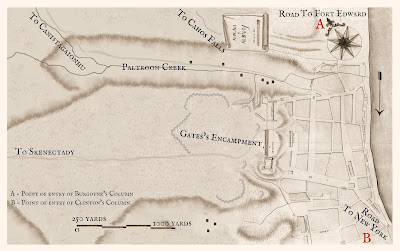