Have been bod painting and basing and am in the process of setting up another 6mm excursion. But while the table was up I thought I have a couple of quickie games.

The Quickie the First; The Backstory..

We want to raid the Watering Station at Wadi Musa (that'll be quickie the Second) but we have no updates as to the strength of the current garrison.

We don't want to run into something we can't handle, so need to have some recent gen.

To this end I have dismounted a bunch of lads, and in the pre-dawn gloom, we have sneaked up to within sight of the station.

I will send guys out to take a peek, just as the night is dying, to see what hostiles might be present. 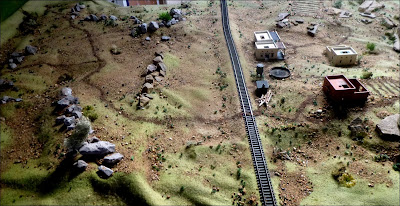 I need to get a guy in full sight and within 18" (in full daylight 6" in darkness, 12" in "twilight") of two areas of the table without being spotted, plus make my way off table with the data gathered, before it gets too light.

The two areas are 1) the dead ground between the railway tracks and the little ridge (left in the pic above) where the rocky ground begins. 2) The area between the buildings.

If we are seen this may alert the garrison and could mean it is even stronger when we attack.

My usual shtick for "sneaking" games:

The chance for random "Events" (see Tables below): I throw a 1x12D per move per group of my guys. On the throw of an "11 or 12" I draw a card from the (standard playing card) deck and apply the result.

A moving group adds 2 to the dice check.

A "sneaking" group takes 2 from the dice check.

A hiding/stationary group which is not within potential sight of a hostile body takes 4 from the dice check.

Modifers (plus to the dice) as the day gets lighter. 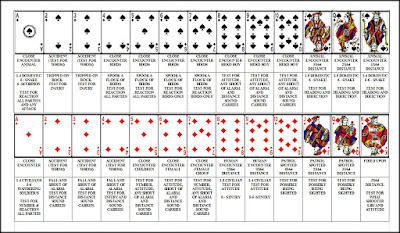 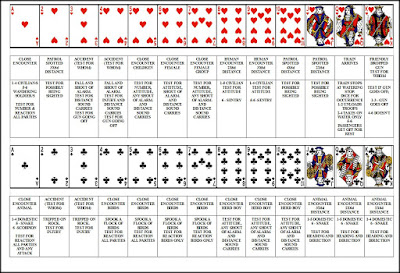 I decide to keep most of my guys hidden (in fact I wonder why I brought so many in the first place) and dispatch Abdul and Mahmood to go sneak.

Using the rocks as cover wherever possible they creep toward the watering station. Things go reasonably well till the Event Dice start playing up.... 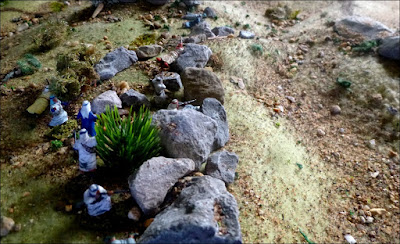 First my lads disturb a flock of birds. No problem as there is nobody near enough to hear or see... Yet.

They do some more sneaking - then another Event; Abdul trips on a stone -but no injuries, and he doesn't cry out.. Phew...

But all this creeping about has taken time. It is starting to get light....

Then, bad luck, another Event - and a three man Turkish patrol appears. Some way away, and while they aren't on the Q.V., but my guys go to ground... 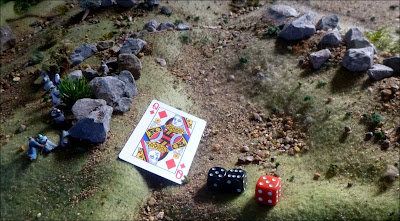 After a while it seems clear the patrol aren't paying much attention to anything.

My scouts take a risk and creep to the edge of a nearby rise, and note that there are four tents this side of the railway (diced for and placed on the table). 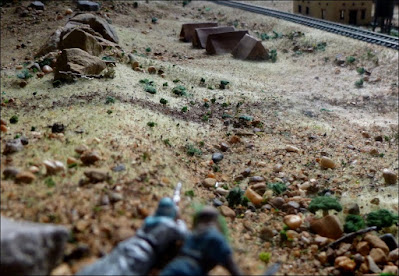 At perhaps up to 6 men a tent that's not good for the upcoming raid - especially as there could be more tents by the buildings and guys in the buildings themselves.

Discretion being the better part of valour, it is decided that the scouts should bring this information back to the main party, before pressing on (if they were lost the info. gets lost). They creep back to the main group.

Suddenly another event.  A shot..!!

But (dice test) it looks like a lone trooper out potting coneys (?) or something. Perhaps for the officers' pot. My boys go to ground. 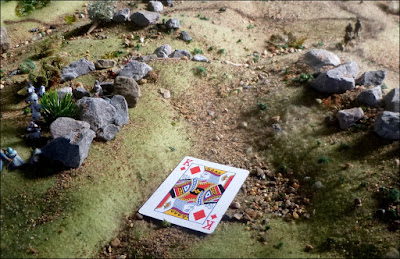 The patrol (dice controlled) ambles about, chats to the hunter briefly, then heads for the railway.

It is starting to get light now, and I am worried about the hunter. He is creeping around too close to my hiding place. He has to go. 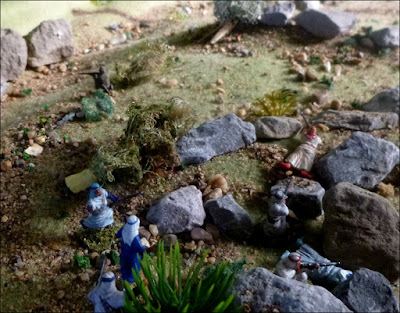 Two of my lads sneak up on him and knife him. As they drag away the body to hide it they disturb first some birds - and then a couple of lazy goats..! But the patrol is too far away to register. 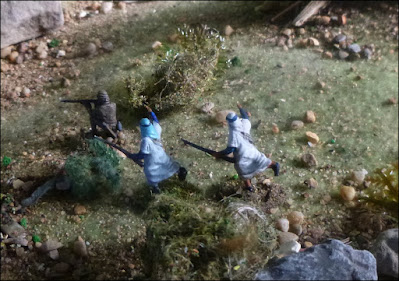 I dispatch Abdul and Mahmood, my best creepers, again. Keeping an eye on the patrol they move off again. As they reach the ridge of rocks the patrol move off along the railway line.. maybe they have a circuit of patrol..?

All seems to be going well. The plan is to let the patrol get further up the track, then sneak along the rocky ridge to get sight of the area between the buildings the other side of the tracks.

But horrors !! Another event: they come across a couple of local kids (herd boys, not goatlets) taking the early morning air (or using the facilities) among the rocks. 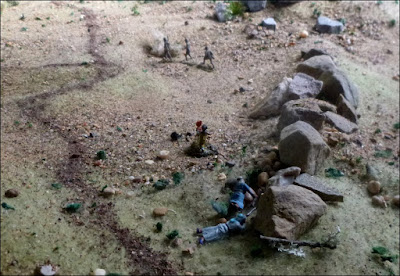 The sight of two weird, creeping strangers freaks the kids out out - and they run off to speak to the patrol. 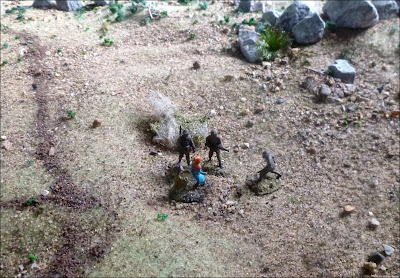 We can't afford a fire fight. My lads pull back quickly to return to the main group.  Luckily they are unseen by the patrol.

However with the patrol now paying attention to their surroundings and moving in our direction - and the sun well up, I decide to cut my losses and pull off the table. Not ideal, but probably the best we can do at the moment.

A fun, tense little exercise. Again, these basic, really systems of hidden/unknown enemy and Event Tables, plus dice-driven decisions (by the enemy and my own guys out of my immediate Command and Control work well for me.