"This Aint The judean Revolt" - The First week:

The first week or so in the "This Ain't The Judean revolt" project has got underway...

Task Force "Titus" (The Fifteenth Legion, 3 cohorts, 4 mixed cohorts, 2 Alae of Auxilia cavalry), coming up from Egypt, pressed northbound along the Via Maris in easy stages, resting overnight in each town.

As expected the advance was unopposed; with Gaza welcoming the force - though Askelon and Azotus proved less friendly, but passive (neutral). Both settlements were left with garrisons of one Aux. Mixed Cohort each, to ensure a clear line of supply. On the 4th day Jamnia opened it gates and feted the troops - another friendly town.

On the 5th Titus left the Via Maris and moved his force inland to the vital road junction at Lydda. This settlement again proved to be hedging its bets (neutral) so a garrison of one Legionary Cohort and a Mixed Cohort were left here before Titus moved on to the (neutral) city of Joppa. Here the army rested for a day. 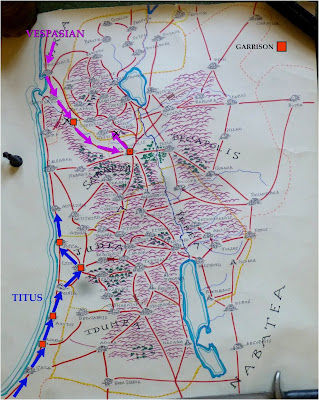 Meanwhile, in the north, Vespasian and the main force arrived at Ptolemais, before pushing into the Jezreel Valley. At Capharecco the town was found to be divided within itself, with factions fighting (Civil Strife). The weight of two full legions, plus auxilia, crushed any dissenters with ease - and the victorious Graeco-Syrian population proved most friendly to the Roman forces.

Moving up the valley it proved necessary to garrison (neutral) Geba (1 Mixed Coh.) before Vespasian moved on towards Scythopolis. This town was lukewarm in its welcome to the Romans, so a garrison of 1 Legion Cohort and a Mixed Cohort was established here. 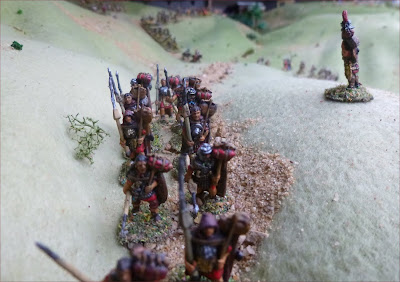 The army rested one night without incident - but then Vespasian (me - I forgot my own rules!!!!!) decided to rest here a second night - sparking hostility in the town. With only 500 insurgents the rising was put down easily, but in turning this neutral town to a hostile one I have not helped my cause - not least by affecting my Supply options. I double the garrison, just to be safe, then, on Day 8, move north into Galilee towards Japha...

Battle of the Nazareth Road:

On the long haul up from the Jezreel Valley, halfway to Japha the Roman rearguard suddenly comes under attack by forces from (as it turns out, hostile) Japha itself, reinforced by rebels from Mount Tabor. Only about 1,400, and mainly light troops, but way to go to secure the flanks... DOH!!!

The attack occurs on the winding road through the hills. The road comes from the south (top of the table in pic below) along the east ridge, skirting a deep,steep valley filled with palm trees, before descending to the valley and then climbing up again northbound along the lower part of the eat ridge.

Romans are moving south to north. The rebels have decided (dice decision) to attack the rearguard as it makes its way northwards. 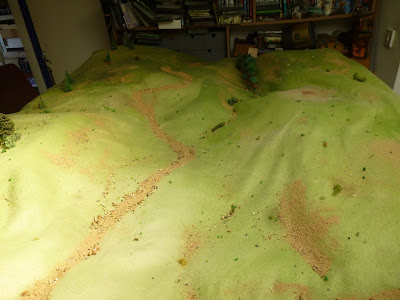 The Roman rearguard consists of:

However; at the commencement of action three Legion cohorts (the "back markers" of the main column) plus a "straggler collection" detail, are still on the table. These may get involved if the Gods (God?) decide this is apt.

There is also the possibility that Roman Flank Guards could turn up.

I decide to "play" the rebels in this "on The Table" game..

The Roman job - in theory - is just to leave the table with minimum casualties.
My job - to disrupt this, causing maximum casualties. If I kill more than I lose this will be a victory for the rebels. 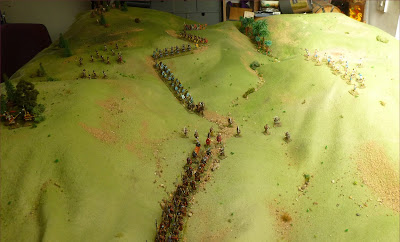 Rules are my standard House Rules: Officer Activation by token - plus Command Chits (as per SP2) , very basic move & fire mechanics, Shock etc. (all as Sharp Practice/Dux Brit.) plus use of a Moral Chart in "sticky situations".

I have thrown in a "Column" token into the mix to allow for the possibility of "Column Back Marker" activation and a "Card Token" to dictate the Roman Rearguard Commander's decision-making process and allow for "imponderables" (see chart; this uses a normal pack of playing cards. A card is drawn each time the Card Token is pulled).

It is assumed all of my units are concealed until I move them. Romans are placed on the table. Then my forces. 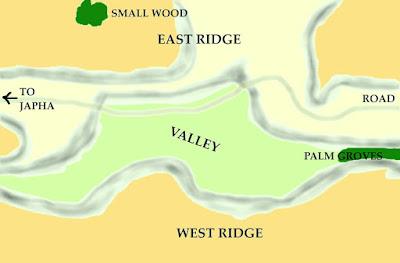 I deploy some 400 men (archers and slingers) hidden among the palms in the steep valley in the south/central part of the table. These are light troops; able to swarm up the valley sides or along the valley, depending on my signals.
Four hundred more slingers (hand & staff) are lying down in the scrub on the west ridge. They are to make themselves known as soon as the enemy rearguard reaches the valley floor.

Four hundred javelin men are lying down on the top of the east ridge (south end) and my command unit, with 200 medium close combat troops are hidden in the wood halfway along the east ridge. 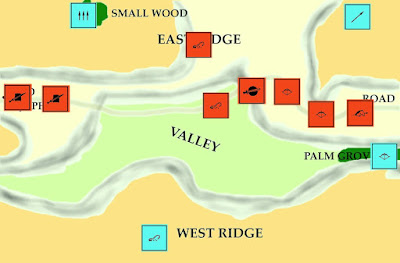 First move goes to me with a Dice activation, each unit activated on a throw of 3-6 (thereafter normal activation rules apply).

A turn of a card and use of the Chart will dictate Roman "policy" first move. Thereafter a card is only turned if the "Card Token" is pulled. 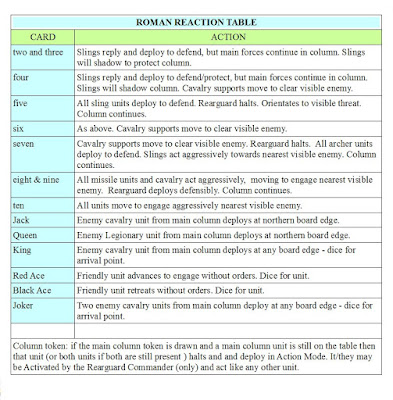 On the western ridge my group of slingers appeared and opened fire on the column. The Roman infantry moved into the valley and formed up to meet this threat and their own slingers replied.

Their cavalry received orders to clear my slingers from the field (a Card on the Card Event Table) and they pushed across the line of march to do so. 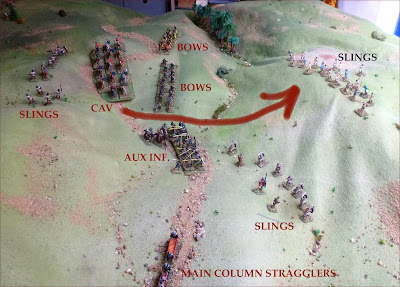 Struggling up the slopes of the west ridge they came under heavy slingshot, and their commander and several riders went down. My slingers scampered out of the way, then a lucky activation allowed them to get a volley in as the cavalry moved onto the ridgetop. Without their commander, and taking casualties, the cavalry were forced to take a morale check - and broke!! However, in the brief exchange of missiles before he cavalry broke, the slinger commander also went down - effectively ending the sling unit's participation in the fight. 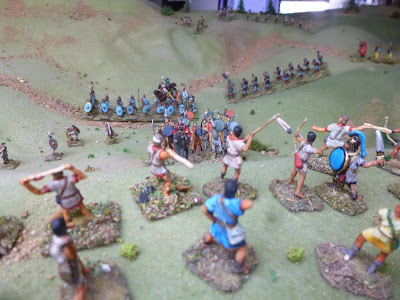 Meanwhile my javelin unit on the east ridge emerged, engaging the enemy's Balearic slings, and my mixed missile unit ran up from the palm grove to engage the enemy archers - now their rearmost unit.

For several moves these missile units peppered each other, though only the Roman archers took casualties in any number.

While all this was going on the Main Column moved off the board en route to Japha.

Suddenly (a Card turn) the enemy commander threw his largest Auxiliary cohort up the slope of the east ridge, where a ravine-like feature would bring them up to support the Balearic slingers.

With a lucky activation I got the chance to throw my (small, previously concealed) close-combat infantry at the Balearic slingers. Unable to evade they were caught - and broken.

The Auxiliary foot moved up the ravine feature, but stalled failing to get to the top. However, its archer contingent advanced far enough to add their fire to the exchange with my missile troops.

There were a couple of moves where only shooting occurred, then the enemy infantry forced their way further up the ravine, threatening my javelin men.

Again, luck was with me - and I was able to throw my close combat troops - and my javelin infantry - against the head and flanks of the Auxiliaries while they were still confined by the ravine. 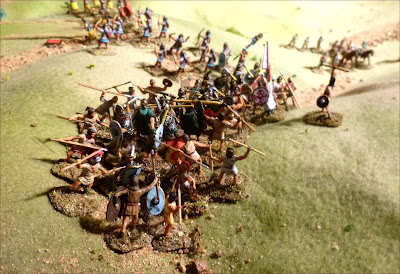 Their Commander and standard went down and, caught in a trap with attacks on both sides, they broke; their archer contingent withdrawing to protect their backs.... 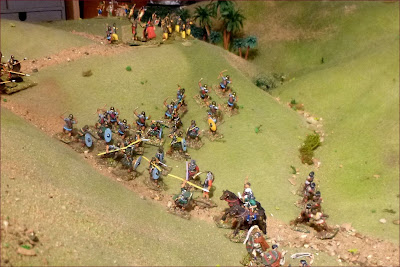 This looked like as good a time as any to withdraw to missile range, which we did. Game over, and the enemy moved off the board unhindered....

The enemy rearguard had protected the main column - but at a cost in men and prestige....... 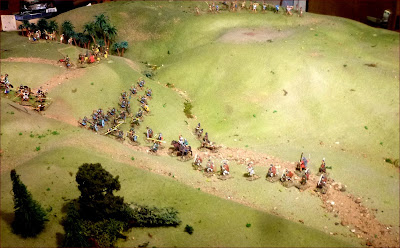 The Butchers Bill was:

Roman Aux inf. killed (we took no prisoners): 180 inc. a Prefect and standard.

Total: 440 dead, inc. three senior officers and a standard captured. There were about 10% of the above got away as "walking wounded" 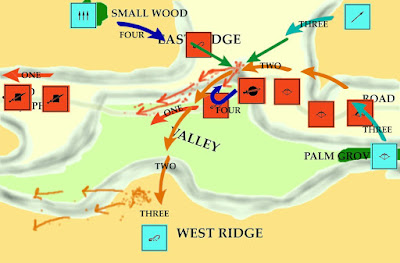 Not as successful as one would have hoped. The enemy bowmen - all of whom were mailled & helmeted - caused most damage, accounting for some 180 of our casualties. I will need to remember that for future reference.

An interesting little skirmish.  But certainly not enough to to stop the Romans in their tracks....

Meanwhile, back on the map:

Leaving a garrison of 1 Aux. Coh.at Joppa, Titus advanced to the friendly town of Appollonia - only to remember, on arrival on the 8th, that in his race to rendezvous with his father he had forgotten to secure Supply Trains from the towns passed through... Choice: despatch a Tribune to visit and organise Supply Trains (with the risk of that Tribune provoking by levying too enthusiastically or getting caught by an Event Card) or retrace his steps with the whole force..