Battle of Albany: Rules and Stuff....

The previous post was a general narrative, not a "dice by dice" commentary, but I'll set out some of the details below.

All "non me" decisions were made by using simple Ad Hoc Decision tables (see below).

Activation of Generals/Brigade commanders - or detached/specialist units where appropriate - was by token using the 1 token per commander/unit, two blank token draw system; with drawing of tokens stopping when only two tokens remain in the tub.

Unit commanders/Leaders which had not moved/fired/carried out any action/been activated in a move can, automatically, fire/ remove disruption in line with their inherent abilities at move end.

A note was kept of artillery ammunition used - limited to 12 salvoes per gun - but apart from tallying the number of moves expended and the special activities detailed below there was no bookkeeping.

The actual fighting/moving/morale rules were an amalgam of Andy Callan's LF&AAS and ideas nicked from SP/NMTB, plus house conventions. 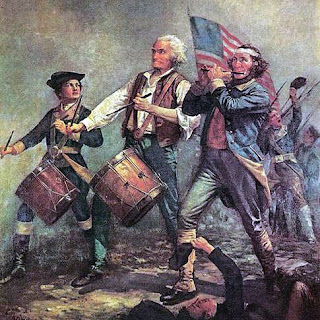 While the British were setting up on the table the detached force (two of Burgoyne's regiments) were sent to secure the warehouses in Albany. They arrived at the town gates at dawn.

At time of The Reveal the Detached Force tested for the circumstances below.

i) On arrival a 1x6d test is made to see if there were sentries at the town stockade/if they were awake.

3-4; they were asleep at their posts and the British lost one move in securing them quietly.

5; they were alert, fired a warning shot and sent a courier to alert Gates. If this occurred Gates will be informed of the presence of British troops in the town at the end of the fourth move after the British entered the town. The British lose a move to subduing the sentries.

6; There were enemy militia units manning the stockade. If this occurred Gates will be informed of the presence of British troops in the town in four moves at the end of the fourth move after the British entering. Throw 1x6D for the number of Rebel militia companies present. On a result of a 6, roll again for more.

(This force number is cumulative with no upper limit. These units will be assumed to have been taken from Gates' force. IF Gates's whole force has already been deployed on the Table then companies making up this total units must be at once removed from any unengaged Rebel militia units thereon. Otherwise these units are not available to Gates.)

Resolve resulting combat on the 1776 CRT, each round of combat taking 4 table moves.

IF the rebel militia defeat the British Detached Force then these units will arrive on the battlefield to support Gates with a throw of 6 on a 1x6D test at the end of each subsequent rebel move.

These militia units will arrive as a single force either on the track by the fort (held by Morgan) or on the access track from Albany previously used by the British (test for this). A Token for this force will be placed in the token tub and Activated as per normal rules.

ii) If the British got into the town successfully then the Detached Force has to cover 1000 yards or so to get to the warehouse district. They march at 75yards  plus 1x6D x 25 yards per move.

Once the detached units enter the town itself they will test per move for problems, until the warehouses are secured, on the table below (if you cannot read any of the tables open them as new tab). 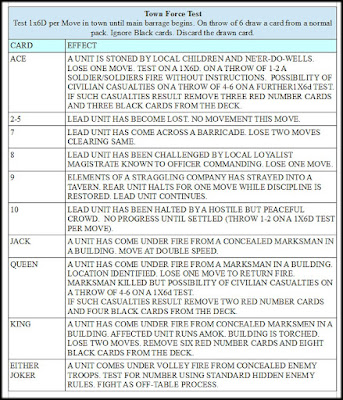 Once the warehouses are secured by the British the town is deemed taken and the Detached units and the town take no more part in the table battle.

b) Fraser and the Lights:

On move six Fraser moved off with the Light Companies, Jaegers/Rangers and Indians following waypoints marked on the Table. The rules I set for myself were as follows:

Once he enters the woodland Fraser must test each subsequent move based on standard "Hidden Enemy" protocols (Throw a 1x6D each move. On a result of 6 a card draw takes place to see if he comes under attack), EXCEPT that all Red number cards under eight are removed from the deck and the following table used: 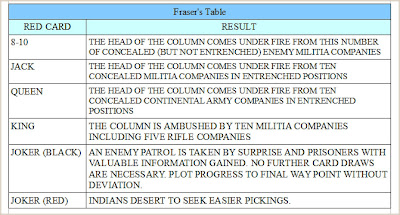 Note: the rebel companies activated on the above will be taken from as yet unactivated commanders on table.

If all commanders have already been activated it will be taken that these units are previously undiscovered local rebel units - i.e. reinforcements not shown on the Map Game. Such units will disperse at the end of the action and NOT subsequently appear on the Map.

However, whether this occurs or not Burgoyne (I) will have no idea of Fraser's actual progress or position on the Table until and unless:

1) There is a message from Fraser regarding his position and circumstances.

However, he will only report with updates if there is something salient to report (e.g. he has run into opposition in force greater than his own, come across enemy entrenchments etc. etc.). He will give a position, but may be out by a four inch radius - the centre point being calculated from the move distance from his start position towards his target, but adjusted for deviation (see below). This message will head towards Burgoyne at 8 inches per move.

2) The sound of reasonably extensive gunfire can be heard (say two moves' worth with at least four companies engaged).

Such an occurrence will be the result of him finding the flank of the main enemy position, as planned, and engaging OR his running into unexpected opposition generated by standard "Hidden Enemy" tests (taken each move). IF such gunfire is heard the location may be marked on the table but will only be approximate, i.e. within an eight inch radius of the calculated move distance centre point, adjusted for deviation (see below). 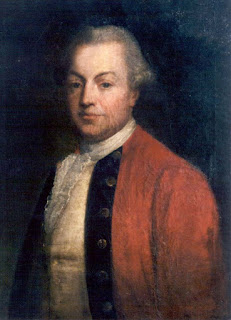 3) His Indians raise a column of smoke indicating to Burgoyne that Fraser is in (or within six inches of) the agreed position to harass the enemy (the final waypoint).

Once his position needs to be calculated he will, in theory, have moved four inches plus 1x6D inches per move between waypoints (these being already marked by "pules" of smoke on the table).

However, at the start of each move from a waypoint/his current position a 1x6D will be thrown to discover if he has deviated from his intended line of march.

On a result of 3 or 4 he makes a bee-line for the next Waypoint (no deviation).

Note: none of these calculations (neither the distance moved nor position relative to the Waypoints will be calculated UNTIL he has reported or gunfire is heard as per 1) or 2) above OR until after move 12. After move 12 test with a Dx6 per move. On the throw of a 6 some of his scouts have arrived at the planned destination and signalled - but the position of his main force must then be calculated and placed on the table. A Token for Fraser is then added to the token tub. .

Throughout the game there were (as usual with me) a series of ad hoc tests whenever a decision was called for for a detached Leader/Unit and Enemy leader.

Some would be specifically slewed (like the Gates example shown on the game report. Others less so. here are some VERY basic examples. 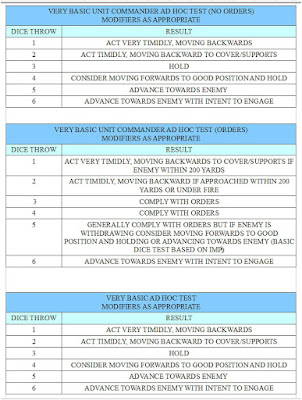 Where appropriate many such tests will be based on IMP and use two dice, with probabilities matching likely decisions (as in the gates test table in the previous post). As always; queries etc. invited re. this.

We knew Burgoyne's battle plan. Did Gates have an actual plan? Or was he winging it?

There has recently been some discussion on the FB solo Group about Solo AIs, and how their "decisions" need, in some folk's eyes, to follow some kind of logical sequence or flow or plan, rather than being random. I'll post MY (idiosyncratic?) thoughts on this, and the place (or absence) of sequence, flow, planning and logic in human affairs  - and especially regarding definitive pre. 20thC battle plans (other than "this is where we'll go, and see what happens") - another time.

Meanwhile, here is a brief account of the Battle of Albany by that little known military historian Lambert Funtnell (Bart.). 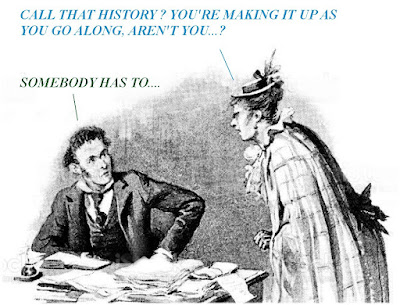 "And so, with cautious Clinton hesitating beyond the creek to the south, and the brash Burgoyne pressing from the northern lakes, it would have appeared that Gates, encamped on the slopes above Albany, had placed himself in a trap of his own making. But not so.

Knowing his man, Gates, no doubt instinctively, felt he could rely upon Burgoyne to make some dramatic, and no doubt dashing, venture against his entrenchments. And so proved to be the case. True, his local levies would not stand to meet the steel-tipped musketry of the mercenary enemy; but all the better, for the old fox had a plan.

Throwing forward a taunting line of skirmishers to the Paltroon Creek bottom he drew the enemy on. Down from their secure ridge the British and their foreign lackeys came. Across the murky creek they splashed, then crawled their slow and mud-clagged way up the steep slopes on which his embattled redoubts lay. In vain, their gunners squandered their precious shells against the unyielding earthworks, where Gates's militia bands waited.

Then, just as the wily fox had foreseen; while the weary redcoats breasted his very palisades, his swift-heeled, local sons of the soil, after taking a toll with their trusty, if rustic, flintlocks, rushed to the security of their drilled and regular brethren in blue, waiting in serried ranks on the Schenectady Road.

From here, gathering his charges like a trusty shepherd, brushing aside the half-hearted efforts Fraser's savage auxiliaries and scattering of light troops, Gates and his loyal regiments slipped from his assailants' fingers; leaving the exhausted Burgoyne and his lackeys, panting with impotent frustration on the hilltop."