A Close and Confused Encounter

Or The Battle of Kerriman's valley.

I've been wrestling (again) with the ever popular FoW and C&C issues this month in a largish 6mm AWI encounter battle; trying out a variant on my "Hidden Enemy" card draw system on something more substantial than the level of skirmishes to which it is usually applied.

Simple enough scenario: The Valley lies on a strategic route. Both sides are advancing along local service roads towards it; the British to destroy or drive off any enemy force blocking their forward movement, the Continentals to reinforce units already in place and so halt, or at least stall, the British advance. 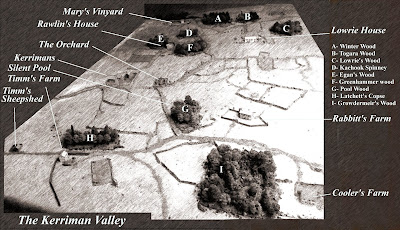 The British are advancing from the east (north being at the head of the table/top of the pic). Their scouts have indicated a possible Continental Army presence in the valley, and so a light infantry/skirmish line has already been sent ahead, while the main force advances, in formations of brigades, along the three local service roads.

I will be playing the British "feeling their way" onto the field; it being presumed that the "home side" may very well already be in situ.

This is an "encounter" where neither side is expecting a major clash, and therefore neither side is prepared for same. Both sides have limited information on the other and neither side has issued tactical instructions to the various Brigade commanders en route to the Valley, just general orders to make their way to the rendezvous.

The game will be divided into two phases.

One: The Pre-Action Phase:

There is no Activation process during the Pre-Action phase; basically all movement will be on a "You go, I go" situation (as in "Never Mind The Billhooks" and the process below) until there is any Combat.

As soon as there is any shooting/combat we end the current move and go straight into "The Action Phase" (i.e. the battle itself).

However, before then we throw a dice per side at the beginning of each move. Highest player wins - and has first go. They move one unit/formation (see below). The other side then moves one of theirs, then the first player moves one of their units/formations which has not moved this go, and so on until all movement is complete OR combat takes place.  Once both sides have had a chance to move all the units/formations they want that move then the move is over.

Where or whether or not a unit/formation moves will be a dice decision based on IMP or existing orders (see Action Table below).

The pressure at the start of the game will be on the British skirmish line Brigade commanders (there is at this moment no central command on the field) to establish what (if anything) awaits the main force.

Once the enemy presence is identified and the full table explored a message can be sent back to HQ.  This situation could affect subsequent British deployment (i.e. once complete data has been received I - the British general - can attempt to influence which Brigades will enter the field when and where).

However, until then the actual arrival (and make up) of the British main force is randomised. 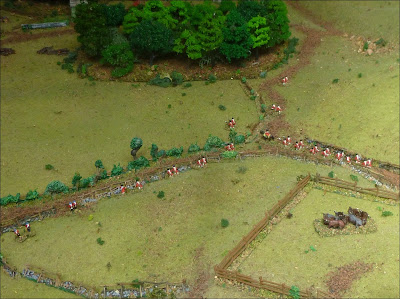 As with my skirmish "Hidden Enemy"  protocols any of my units moving through/remaining next to an "unexplored" area must test at the end of every move. For this exercise they must test on a 1x12D.

Light troops testing take one from the dice throw, as do all units which have remained stationary (cumulative). Cavalry add 1 to the test throw.

To find out what has occurred I draw a card from a standard card deck and consult the Events Table (below; right click & open in new tab to view).

The result is then applied. 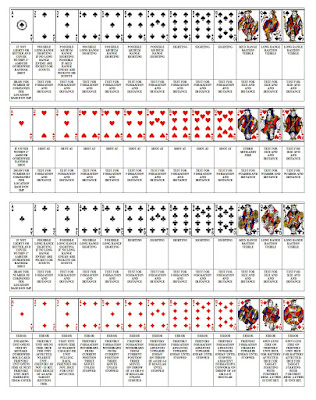 It will be noted that some Events Table results mean that the testing unit sees enemy units or is fired upon/ambushed. Enemy units which are simply seen are placed on the table, but may not move that move.

Enemy units who fire/attack attack the testing unit; with the newly discovered enemy unit/s acting as if the move is continuing (which, in effect, it actually is).

To be classed as "explored" an area must have been marched over or be within/have been in Line of Sight within four inches in the open or within three inches if in forest of one of my units.

"Exploration" procedures remain in place even once the Action Phase has commenced. 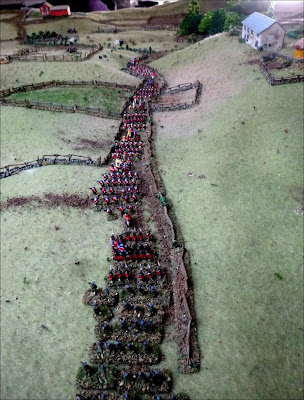 During the "Pre Action Phase" British arrival (in Brigade-sized formations in column of march) is randomised with a 1x6D dice test per move at each move end.

On a throw of a "6" on a 6d a British Brigade arrives. This will contain a senior Brigadier and a formation of between two to five regiments (test with 1x Ave. dice). This formation arrives in column of march on a road.

A further throw is now made for each access road on the friendly side of the table to discover which road is being used by that arriving Brigade. Highest score is the road being used.

In the event of a draw when testing ALL drawing roads produce a Brigade in column of march that move. It is therefore possible that a British force, having made good time, could potentially arrive/march into an "unexplored" part of the field.

An arriving column may move one normal move onto the table but cannot move within two inches of an enemy unit.  If it encounters such a unit the column must halt at once. The column can carry out no other action that move - even if such a restriction places it at a disadvantage.

The type of the various regiments in the Brigade will be decided by 1x6D dice throw.

For this scenario, on a throw of 1-5 it will be a standard British regular regiment.

On a throw of 6 it will be a "special" unit. A second test dice throw is now necessary to discover what kind of special unit.

Throw of 1-5;  is a Grenadier, Hessian, Ranger/Light Infantry or Highland unit (plucked randomly from the toy box).

Throw of 6 - HQ (general in command and staff) or, if HQ is already on the field, cavalry or artillery.  Dice for which: 6 = cavalry, 1-5 limbered field artillery (dice 1x6D for number of guns).

Note: British artillery will only arrive AFTER combat has started. 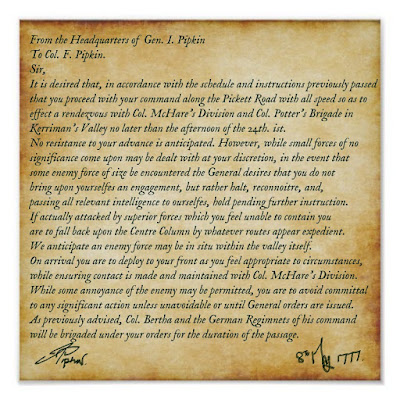 At the end of the American turn there is a possibility that they, like the British, will receive reinforcement via the access roads on their side of the field. The same process as above is applied except that when a test for the American brigade make-up is made the results will be (for this scenario) as follows:

1) On a throw result of 1-5 on the Brigade test dice (1x6D) the reinforcing force/Brigade will consist entirely of ordinary infantry regiments.

Next test 1x6D for the number of infantry regiments in the brigade arriving (a single regiment will be assumed to be on detached service. It may be "brigaded" into a formation during the game if IMP warrants and C&C circumstances allow).

Then test 1x6D for the type of regiment per regiment: 1-4 Continentals. 5-6 Militia.

Then test 2x6D for the number of bases of three figures in each regiment (i.e. a regiment may be from 2 to 12 bases strong).

2) A throw result of 6 on the Brigade Test means only one unit arrives, but the arriving unit may be a special unit.  Throw 1x6D.

Throw of 1-2;  is a Militia rifle unit with sharpshooter ability. Test for size as above.

Throw of 3-4. Normal Continental army unit. Test for size as above.

Throw of 5- 6; HQ (general in command and staff) arrive. If HQ is already on the field the new unit may be cavalry or artillery.  Dice for which: 6 = cavalry, 1-5 limbered field artillery (dice 1x6D for number of guns).

Basically the Pre-Action Phase will be one of exploration by the British and, possibly, the build up of friendly and/or enemy forces due to reinforcement.

From the above is should be clear that I, the Active Player, have no real idea what enemy forces will be in situ until the field has been fully explored. Neither can I be certain of the timing or quantity of enemy reinforcements or indeed my own army (the vagaries of terrain, transport problems, officer failures etc. being part and parcel of any military movement).

More than this, until "I" - in the form of the General Officer Commanding figure - arrive on the field in person I have no way of controlling either my advance parties nor any reinforcing troops who arrive before I do. What these groups do until in possession of a direct order from "myself" will be dice-driven based on IMP and/or an Action Table such as that below (right click & open in new tab to enlarge). 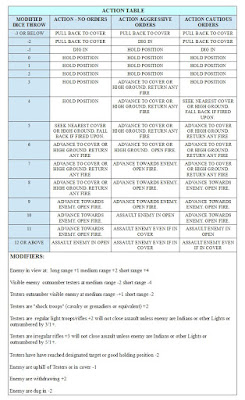 Once a test has resulted in a specific action then, in the absence of positive orders, a 1x6D test must be made each subsequent. On a throw of a "6" another Action Test must be made.

Enemy actions will be dictated by a similar process.

Once any attack/missile fire takes place that is at once the END of the Pre-Action Phase.

We now move into the "fighting" part of the encounter.

No unit or formation can move unless Activated by a Leader.

The activation, movement and fighting House Rules are very basic, being an amalgam of ideas from SP (the Activation aspects), existing House Rules and Andy Callan's "Loose Files and an American Scramble".

The respective Generals, Brigade Commanders and artillery batteries each have individual Activation tokens, which are placed in the Draw Tub if they are already on the field at the Phase change or at the end of the move in which they arrive on the field (and not before).

For each two Brigades on the field (rounded down) a Command Token for the appropriate side is added to the token mix (note: reinforcements will also add Command Tokens to the mix, but only at the end of the move in which they first appear on the field).

Once the Continental General  arrives on the field the American reinforcement method changes - a Reinforcement Token is added to the Draw Tub and a test made per access road (as above) each time that token is drawn.

Once the British General arrives on the field their reinforcement method changes also - a test being made (as above) only  when the General's Token is drawn (note: bringing on reinforcements is NOT an Action by the general).

However, loaded units which have not been Activated that move in any way, and have enemy units within close firearm or close to medium artillery range, may fire. Hostile or friendly units out of Player Control make a test to use this option: on a throw of 1 the unit does NOT fire.

Where no specific orders have been issued by the British General the Action Table will continue to be used for British detached formations.  Otherwise they conform with orders.

The Continental General and detached formations will react according to circumstances by means of ad hoc decision table/dice, based on IMP and any orders.

At this stage the British do not know who is in command on the American side of the field, so that his "personality" is unknown.

This personality will be assessed based on his first four "decisions".

So, those are the procedures. As always if you have any queries please ask or comments please post. The actual fight, along with some more technical notes) is described on to the next post. 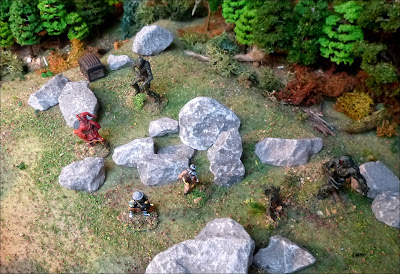