The "Not The Judean Revolt" Project rumbles on.....Between work, painting, a range of displacement activities and reading (Pat Reid's "Colditz" account.. TOTALLY recommend... And I ended up buying the reprint of the game.. Oh, dear what a bad boy..) we progress..

Hop's Escape..Next Scenario was prompted by actions of the Sanhedrin and is an "escape" scenario. Hop, the reluctant "Good" Samaritan, has to escape from Jericho..
Hop, his friend Joshua the innkeep (their fates currently in the in the hands of Hop’s mysterious - and dodgy - rescuee “Alpha”) - along with Hop’s irritating business partner Simeon the Sniffler reluctantly in tow - need to leave Joshua's inn (top left in pic below) without the knowledge of local police chief “Mister Jericho”.

A guide, arranged by Alpha through his dubious contacts, is to shepherd the group through Jericho’s dark, dodgy streets, and the maze of irrigation ditches, beyond the town, to a rendezvous with some mules for a fast night trek to Jerusalem (bottom right in pic above).

Potential hazards (apart from a possibly untrustworthy guide, a possibly duplicitous “Alpha”, and the loose cannon that is Simeon) include the patrols of the Jericho Watch (pic below), grudge-bearing associates of the band of ne'er do wells recently “neutralised” by “Alpha” and members of the Barabbas Gang (reluctantly aided by Hop).

Additional problems may include “The Men In Black” (Sanhedrin Enforcement) – and Undercover Tiber Boys (Roman Military Intelligence). Plus all the other dangers of an unlit city at night...

The hazards are encountered based on dice thrown for each street or ditch corner visible to the group each move.  On a throw of "1" a Blind appears at the corner. Next move said blind could be activated and move (direction and distance dice-based). 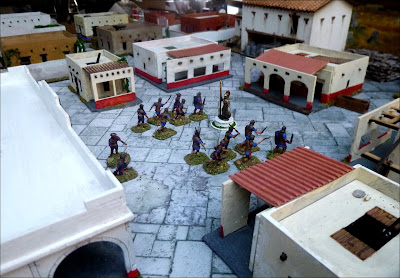 Activation: Named characters and the Guide are deemed always activated. Other individuals/groups/blinds throw a dice (1x6D) per move; result effects are 1-3 not activated. 4-6 Activated.

Blinds: At the end of each move the Guide dices 1x6D for every street/ditch corner/junction in line of sight within 12" and, on emerging from the town, for each end of the "perimeter road". A similar check is done for the Town Square. On a throw of "1"a Blind appears. Once within LoS and 8" of the group do a check throw (2x12D) on the Blind Table (below) to reveal the blind type. 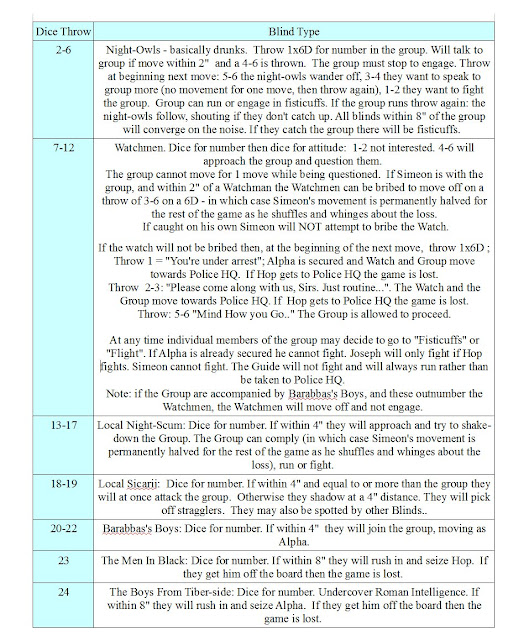 Movement: This is dice-dictated: each named character throws a 1x6D dice and adds/subtracts his personal ability. The result, in inches, is their maximum movement that move. Each activated non-player group does likewise. Each figure/group can, if activated, always move 1". Non-character figures/groups dice to see in which direction or move as per the Blinds Table.

Houses may not be entered. Compounds may be climbed into (speed halved) or entered by the gates.

The Tavern may be entered, but counts as "Night-Owls" (see Blinds Table).
Graveyard:The Graveyard counts as hard cover for concealment and shooting.

Simon and spirits. Throw a 1x6D at the end of every move Simon is in the area/within 2” of a tomb.  On a throw of 1 he “sees a spirit”.   A “spirit “  (pic below) will appear 6” away from Simon, starting to move, after Simon’s movement the turn after it appears.

The Spirit is always Active and moves 1x6D per move directly towards Simon by the shortest route.

If it approaches within 1” of Simon he risks having a heart/panic attack. Throw a 1x6d. On a result of 1 he drops stone dead.  On a throw of  2-3 he becomes incapacitated and must be carried (half speed) by Hop or Joshua  for the rest of the game. On a throw of 4-5 he must stand and recover for 1x6D moves.
Once he has tested the “spirit” vanishes.   (Note; nobody else can see this spirit and this is one-off occurrence -  i.e. only one “spirit” appears per game ). 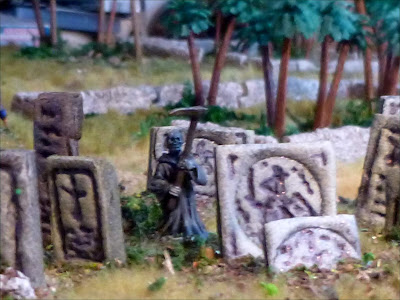 If people crossing the dye works are in a “chase” or “hiding” scenario throw a 1x6d for each person for each move they remain in the works (partial moves count as a move).  On a throw of 1 that individual will leave “tracks” for a while when the works are exited (basically they have managed to get dye on their boots). 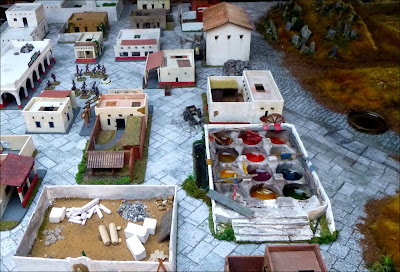 The Guide and Alpha will move a dice throw in inches per move plus 2".

Joseph and Hop will move a dice throw per move plus 1".

Simeon moves a dice throw minus 2". At any time during their move he can be chivvied/dragged along by Hop by both figures moving next to each other and combining their move throws and dividing by two. However, next move Simeon tests with a single dice throw before his movement dice throw. On a throw of 1 he has a paddy and will not move next move at all....
If there are potential enemies in sight Simeon can also be chivvied/dragged along by Alpha by combining their move throws and dividing by two, as with Hop. However, Simeon will be intimidated by Alpha so will not make a "paddy test". Alpha will only do this three times during the game.

All character & NPCs can run by adding 4 to their move allowance. However, NPCs only run if attacking or if the group are already running. 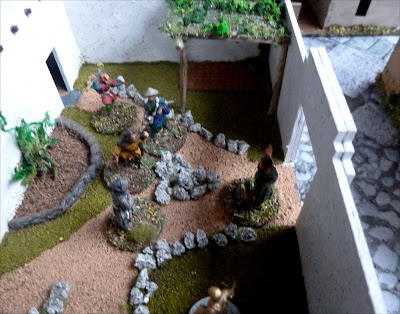 Note; If anyone wonders where the Plot comes from the answer is the novel "Jericho Road" by Claud Cockburn.

Well the party left Joshua's inn, wandered through the town and, although coming across a solitary (going off duty?) watchman managed to avoid any close encounters with the Blinds which appeared.  Until....

At the edge of town a Blind came very close - and was revealed as 6 of Alpha's mates from the Barabbas Gang.. Excellent. Extra hands...

However, on approaching the complex of irrigation ditches a Blind appeared ahead of the group and, shortly after, two more emerged from the town. 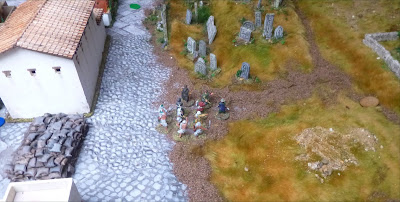 The Blind ahead of the gang was revealed as five watchmen. Outnumbered by the group (now they had the Barabbas Boys with them) the Watch merely watched (it's what they do best) as the escapees climbed up towards the graveyard.


So far so good... But another blind turned up - another bunch of Watchmen, six this time; if the two groups join up our lads could be in trouble. We back into the graveyard.... 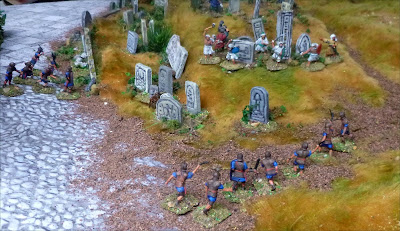 In the Graveyard Simeon thinks he sees a ghost, panics, and runs straight into the arms of the Watch... One down, as he is taken in for questioning... 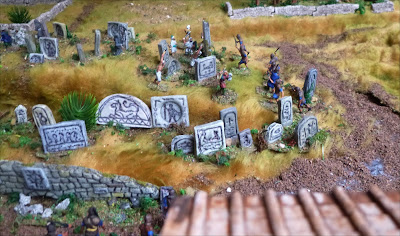 At this point, as Hop, Joshua and Alpha run after the guide, who is making off at speed; spooked not by the spirit, but the large number of Watchmen. The Barabbas Boys are also getting jumpy.  They leave our group and withdraw towards the base edge... 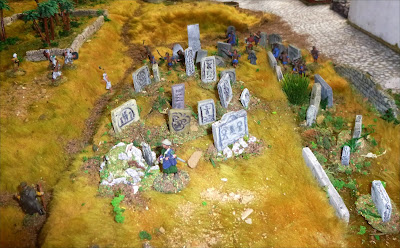 With the Watch more interested in the Barabbas lads (diced for) Hop's party make off through the irrigation ditches. There is a close call (a run-in with some drinks), but, within a few moves all is done, and, sans Simeon, the group leave the table for Jerusalem.....

A partial success for me, the player... On the Generator the embarrassment to the Civil Power of Hop's escape moves the Progress Token nearer revolt. 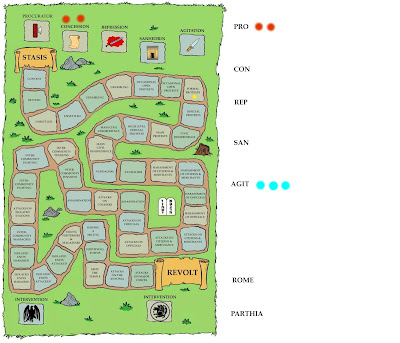 A further move takes place, with the Agitators choosing to use another token; this time the dice throw decides they'll go for for a bit of Anti-Roman vandalism the "People Called Romanes?" scenario....

I tweak the board a little (just add a semi-derelict fort and move the buildings a tad) and scribble out the rules....
"People Called Romanes?"
All our hero has to do is paint up 12 slogans without getting caught by the roving Roman Patrol.

However, this is, again a live night-time environment. Other hazards/potential informants include muggers and various folk who may point the enforcers his way if he has wandered passed - unless he has "squared" them from his limited purse (including various beggars, Watchmen, local night-owls and those wandering wayfarers of the night Madam Palm and her five lovely daughters..). 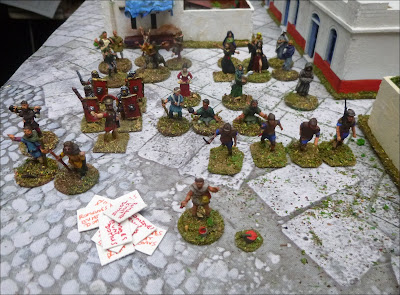 He moves 4" + a 1x6D in inches.
Painting a slogan takes a full move.
He can run at 6" plus a dice, but must throw a "spillage" dice each move he does so. Each "pip" represents the loss of a tenth of his paint pot. He has another pot left at his starting point, and can refill a pot at the Dye works.

Starting positions for the various folk (apart from the taverners) is diced for, as is the entry and route of Romans, muggers and Watchmen.

Each slogan painted on a "Sensitive Site" (the old Roman fort, the statue in the main Square or Watch HQ) counts double points. Once a Watch unit passes (or passes a unit or person which has already passed) a vandalised Sensitive Site that Watch unit cannot be bribed.

If he succeeds the Revolt Table will progress......