The campaign rumbles on.

In the west the Legate, satisfied that his detached juniors know what they're doing (?), pushes on; calling in the chiefs of the hills abutting the Nida Valley to submit peacefully and building (another!!) fort and depot. This will effectively tie him up for another six days - unless he decides to break off.

In the north east the cautious C.O of the North Vexillation, Porcius Licinius, sits at Fort Serovium - neither pursuing the recently seen-off Celts (currently moving southwards) NOR heading north to complete his main mission... 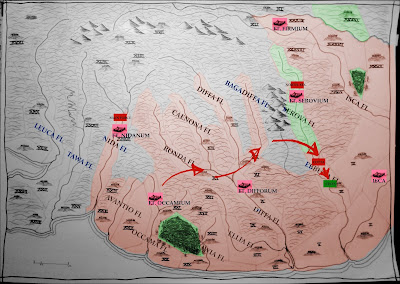 What IS he about? Shame... He started so well as a junior officer. Looks like it's the classic "Fine regimental officer. Hopeless divisional commander" syndrome in action.

Yes, he has orders to comply with.

But letting a hostile force run off like that will NOT do his career prospects ANY good at all..

To quote G. Suetonius Paulinus (from Shipway's "Imperial Governor" anyway - cover pic. below a fine novel, IMHO) "From her officers Rome will tolerate much - corruption, inefficiency, vacillation, lechery, venality. Only two sins are unforgivable; overweening ambition and desertion in the face of the enemy".

Meawhile, Primus Pil. Caelius Cotta, sent east from the Main Force with HIS vexillation, is on a "Seek and Destroy" mission.... He doesn't know about the recent battle further north (how could he - nobody actually knows where he is?).

Force-marching in stages (seem ap above) he reaches the Abana headwaters, is pointed in the right direction by friendly locals (diced for - but it's amazing how three legion cohorts with cavalry supports buys you a LOT of friendly faces who suddenly DO know the way after all, up in them lonely hills - see table below) and moves into the valley of the Ebbuna. 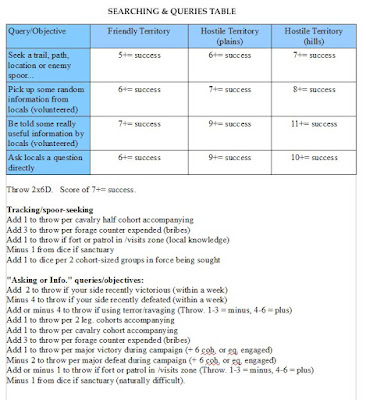 Picking up a recent, southbound trail of the hostiles (again, a dice-throw decision - see above) his cavalry fan out and locate the enemy, who realise they have been spotted. However THEY have no idea that this is a new force ("All them Romans look alike, dun'ey").

Even so, the Celts have a choice: turn and fight, run for somewhere safe - or call it a day and scatter the force.

A council is called - and practically all of the chiefs are for fighting it out - after all, the Roman commander didn't make a good showing last time out, did he..?

They happen to be in a zone with a cluster of hilforts. They COULD take over one of these and make the Romans and come get 'em - taking advantage of the defences and using their slingers to good effect... They discuss this...

Maybe it's contempt for the enemy force they recently fought, or overconfidence -  or maybe horror stories of how these tin-clads dig like moles, hem you into your forts with ditches and palisades, then use infernal machines to pepper and burn you out like a badger from its den - that's decided them. .

Whatever the thinking behind it the council decide to fight it out in the open. I note that the chariot commanders are loudest in calling for this...

Meanwhile, as we know, Cotta has no idea what the North Vexillation has been up to. He knows the overall plan - and that there is a minor fort at Serovium. Co-ordination between the Roman forces, which would be pretty useful right now, ought to be being considered I reckon......

But WE already know what Porcius Licinius is doing; Nada... He has no idea that Cotta is anywhere hear him, and as he has pulled in his patrols he is unlikely to stumble across Cotta's force.

As for Cotta; as far as he is concerned the North Vex. should be pushing west along the river valley north of the Black Mountains - three to four days march away by now (and not, as they are, sitting just over the hills to the north of him and less than ten miles away...).

Fort Serovium, to the north, is just an auxiliary outpost (Cotta knows nothing of the attack on the fort or the subsequent battle). He could send someone to see what they know about what has been going on locally - and as a courtesy - but in all the excitement of making contact with the hostile warband this gets forgotten (diced for).

He considers sending a courier to look for the North Vexillation requesting support - say their cavalry, despatched post haste - but decides it is pointless (A simple dice decision. Command by committee for the Primus Pilus ..? I should cocoa....) since the Northern force is bound to be too far away to help quickly - and he certainly can't afford to wait for a response before acting, in case he loses touch with the hostiles..

After a brief rest and a few hours of snatched kip it's "Caligae et Sagmae", straps tightened all round - and his command jogs off on the trail of the hostiles....

And Next Episode: "The Battle of the Ebbuna Plain".

Hopefully Cotta won't let me down, but things are not going as well as they started... G. S. P. would understand the frustrations, I suspect........ 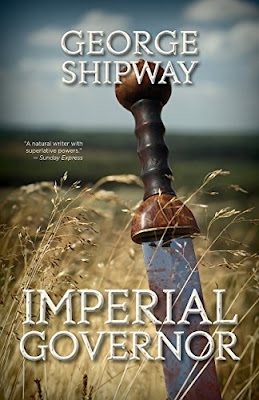